How the United Kingdom can create a better Subsidy Control system

In this article, Jonathan Branton and Alexander Rose review the Subsidy Control rules and provide some pragmatic changes that can be quickly implemented by the UK Government.

At a time when the UK is faced by the worst economic slump for 300 years (1) it needs strong and clear Subsidy Control rules.  A lot of time and energy was expended disassociating from the sphere of EU State aid and much was achieved in negotiating the subsidies chapter of the EU-UK Trade & Cooperation Agreement ("TCA").  Now the UK needs to deliver a strong and clear system to maximise returns from public funding, coordinate investment towards national priorities and protect the competitive landscape from the harm that can arise from the award of excessive and poorly targeted subsidies. In this article, we advocate for some pragmatic changes that can be quickly implemented by the UK Government.  If enacted, we are optimistic that these can facilitate the economic recovery through which the UK economy is re-built.

An opportunity to create a better system

The UK is currently running a consultation on whether to improve the interim Subsidy Control regime that was brought into force at 11pm 31 December 2020 (2). The UK's interim regime was quickly created after the TCA was agreed on Christmas Eve.

Whereas the EU State aid rules were deemed too bureaucratic and rigid, the interim regime is vague and in places dis-proportionate. This is because for most subsidies awarded there are no guarantees of legitimacy, and the new regime places a requirement on to every public body to consider all the UK's international commitments relating to subsidies when awarding public funding. So for example when a District Council awards a grant to a local business it is currently instructed by government guidance to create an audit trail that details how it has considered the effects of the EU-UK TCA and whether there is an "appreciable risk" of creating a dispute under the WTO's Agreement on Subsidies and Countervailing Measures and all the other Free Trade Agreements that the UK is party to, such as those entered into with the Ukraine and Japan. In practice, this creates significant confusion for the Public Sector at a time when we most want them to act quickly and to be able to provide legal certainty. Furthermore, for the vast majority of the subsidies that are awarded there should be little to no controversy or risk arising anyway.

It is also noteworthy that the new rules don't incentivise funding towards particular outcomes. The Government states that levelling up, economic protection and R&D are important, yet the new regime has done away with any sort of preferential treatment for these sorts of investment over others. Now there is no notional difference in the ability to subsidise investment in a new factory in Surrey or Sunderland. Likewise there is no higher level of intervention for R&D, nor specific preferential treatment for climate change. Whilst none of these activities are prohibited under the new regime, they are not incentivised.  Can this be right if levelling up, the climate emergency and innovation are designated government and national priorities?

The new Subsidy Control rules do have their benefits. The UK did well to negotiate sufficient space in the TCA for the UK to create its own system, and this provided an opportunity to address the main problem with the old regime, which was that the EU State aid rules were far too slow at providing approvals for the largest awards. The new Subsidy Control rules enable projects to be assessed against six Common Principles set out at Article 3.4 of the TCA. This creates new flexibilities for such projects, which can benefit Global Britain as it builds new economic sectors.  Unfortunatley, there is little to no guidance on how to apply these Common Principles, nor no assurance that they are definitely met, even for lower risk subsidies for comparatively small amounts.As a result, the interim Subsidy Control regime seems not yet fully formed, and currently missing an opportunity to do things better. As a Local Government lawyer told Politico (3) "the new regime is probably a bit more flexible but the lack of clarity arguably negates any benefits of that".

What should the new regime achieve?

We agree with the Government's consultation document that: "The UK needs a subsidy control system which minimises distortions to the normal operation of a dynamic and thriving market economy, and which facilitates strategic interventions to deliver Government priorities such as levelling up and achieving net zero".

Furthermore, we agree with the design priorities for a new regime that were circulated to the press during the 2019 election campaign, these being that the UK's new system of Subsidy Control should seek to be:


In our view, when it comes to the interim rules, the absence of clear guidance on the application of the Common Principles and lack of legal certainty that the tests are met undermines the first three priorities. The new regime can be more permissive and that is a good thing considering the range of different situations that can be encountered and the number of grey areas that can arise within them.  For example, the new regime does not contain the same prohibition on support to steel manufacturing, in the manner the EU regime had done previously. This is inherently sensible as even though this remains a sensitive sector there may be reasons why it is strategically important for the nation to be able to support such activity. This will depend on the circumstances and a case by case approach. However we believe flexibility need not always be at the cost of certainty, especially for lower risk situations. Therefore in advocating further developments to the UK regime we've sought to focus on these points.

We believe that four broad improvements need to be made to the new Subsidy Control rules.

These are that there should be:


A. Clear guidance on when a subsidy is not present
Where a measure is not considered a subsidy then it is unlikely to be subject to any of the international commitments. Therefore, the Government should support the Public Sector by providing detailed guidance that can be used to determine whether a measure is within scope. Not only will this lead to a more consistent application of the law, but it will also result in Public Sector bodies designing interventions to minimise administration.

B. Safe Harbours for lower risk subsidies
For smaller scale, more regularly awarded subsidies, the Government should set out in statute a list of "safe harbours" or "category exemptions" which can be presumed to be compliant. This would provide legal certainty for the many routine and small Public Sector interventions that clearly pose no significant issues. 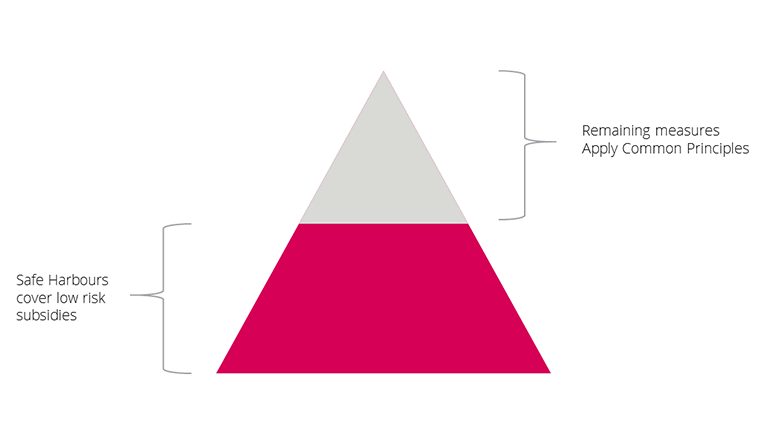 The advantage of this approach is that it would apply lighter touch rules for lower risk subsidies.

In terms of the legal mechanism, we would anticipate that the Government would publish conditions which are deemed in advance to satisfy each of the six Common Principles. By placing the new safe harbours on a statutory footing, measures which properly satisfy the relevant conditions would be protected from recovery under Article 3.11.5 of the EU-UK TCA. We would anticipate that the safe harbours would incentivise funding towards particular outcomes, including levelling up, economic protection and R&D.

Importantly, such safe harbours do not prevent interventions proceeding under the Common Principles, just as they do today. They simply provide a route by which the Public Sector can minimise administration for lower risk, more regularly encountered awards. We anticipate this would be a popular change with both the Public Sector and organisations seeking public funding (as they can design their applications to meet the requirements for a majority of situations).

C. Detailed guidance of how to apply the Common Principles
Much of the confusion about the new regime comes from the lack of meaningful guidance on how to apply the Common Principles. Public bodies are unsure as to whether they need expensive expert studies and this has a chilling effect on new projects. This may be easily rectified by the publication of detailed guidance explaining how to establish whether the level of funding is proportionate, limited to what is necessary and appropriate. Working through each of the six Common Principles at this time is difficult, but detailed guidance will assist Public Sector bodies to take a clear and consistent approach, thereby speeding up the award process.

D. Independent Authority
As set out at Article 3.9 of the EU-UK TCA, the UK should have an independent authority which oversees the Subsidy Control rules. Our view is to make the most of the opportunities available under a new system of Subsidy Control that this should not replicate the European Commission role. Instead it should:


Our view is that the independent body should ideally be located outside of London, recognising the importance of levelling up, and to seek a greater understanding of the balance of issues and challenges facing different parts of the country, while recognising that typically it is those parts of the country that have traditionally been less affluent that most need positive subsidy intervention.

A vague Subsidy Control regime is not an ideal basis for economic recovery (5). Instead the UK should put in place strong statutory Subsidy Control rules that help ensure taxpayers’ money is spent wisely and are a means to ensure the State’s finite resources are allocated productively and as effectively as possible in line with government priorities, in order to maximise economic growth. We have set out some pragmatic steps to create what we think would facilitate a better system of Subsidy Control.

(4) There should be no presumption of guidance being available and nor should not be a general “free advice” bureau.

DWF Law LLP has exceptional experience in public funding issues, including setting up programmes of support which satisfy government guidance, advising upon how to compliantly procure services and meeting the Subsidy Control rules. Members of our Public Sector team having worked within the Central Government, Local Government, the European Commission on high profile public funding initiatives.  This means that we are a safe pair of hands when it comes to managing issues such as this. Please feel free to get in touch, if it would be useful to discuss any of the issues raised in this article or other matters related to public funding.