DWF were proud to be a sponsor of Trade NI’s Westminster reception at the House of Commons on 18 May. The reception was attended by business leaders, Ministers, MPs and over 50 embassies.

DWF's executive partner in Belfast, Julie Galbraith, was a keynote speaker at the event.

This event was an opportunity to showcase Northern Ireland and to highlight to the MPs and diplomats in attendance that Northern Ireland is ideally placed for investment, growth and new opportunities. Trade NI is an alliance between Hospitality Ulster, Manufacturing NI and Retail NI, three of the largest sectors of industry and the majority of businesses in Northern Ireland.

Despite current political challenges, the business community in Northern Ireland were united in calling for future Executives to deliver a clear economic strategy for NI and urged the UK Government to work to resolve some of the practical issues arising from the Northern Ireland Protocol. There was a clear and consistent message from all the contributors that Northern Ireland has a lot to offer to the rest of the world.

Julie Galbraith stated "Trade NI are leading the way in engaging and focusing Westminster politicians on the importance of NI and its evolving business landscape. The region has a strong business community and should be considered across the United Kingdom as a thriving business hub for the global market.”

Leader of the Opposition, Sir Keir Starmer, spoke about the uncertainty in Northern Ireland and highlighted the need for a pragmatic solution over the Northern Ireland Protocol difficulties.

Northern Ireland Minister of State, Conor Burns MP highlighted that Northern Ireland has so much to offer to the rest of the world, and the UK Government is committed to supporting this economic development and shining a light on its potential as a fantastic place to live, work and do business.

The DWF team in Belfast are trusted advisors to many businesses represented by Trade NI and regularly act for national and international businesses investing in Northern Ireland. The team brings commercial intelligence and industry sector relevant experience, particularly to the retail, hospitality and manufacturing sectors.

Julie Galbraith also took the opportunity to highlight that Northern Ireland has become a leading global location for Financial and Professional services, having grown significantly in the last ten years and contributing to the overall success of the Northern Ireland economy.

Julie commented "Northern Ireland, despite political challenges, exceeds expectations. It is a great place to grow a business internationally. With the political will, investment by local and central Government and the unique opportunity of a land border with the EU we have the potential to become an economic powerhouse. If the Government is serious about levelling up then further investment in Northern Ireland must be part of that agenda."

"In Northern Ireland we want to lead the way, we are a unique region and despite being the smallest region of the UK, companies large and small look to us for growth.

We want to work with like-minded businesses with their sights set on growth."

Find out more about our team in Belfast 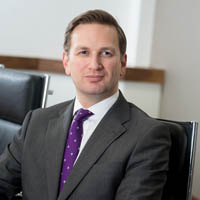