The Rise of Public to Private Transactions

2019 saw the highest number of P2P transactions to date, with 28 UK companies taken off the stock market following a private acquisition. This figure accounts for a 40% rise in the number of such deals compared to 2018, illustrating their rising popularity as buyers seek to take advantage of all time low interest rates in the UK and Europe and suppressed valuations on the public markets.

For private equity firms specifically, P2P transactions have become an increasing feature over the last few years. There has been significantly greater deal activity along with a surge in deal value, which hit a record high in 2019 of £19.6 billion across the UK private equity-backed P2Ps, more than double the 2018 figure of £8.3 billion.

As private equity funds increasingly compete for assets, so too will the likely appetite for P2P transactions. But what are the risks and how can private equity best make use of the new and likely lasting trend?

Public to private transactions are, in their basic form, the sale of a publicly listed entity to a private entity. The structure of such transactions can vary, but in the context of private equity, the buyer is generally a newly incorporated unlisted company with the transaction financed by a mixture of share and loan capital injected by the sponsor alongside bank debt from a third party lender.

A UK takeover is primarily regulated by both the UK Takeover Code (the Code) and the Companies Act 2006.

The Code is administered by the Takeover Panel (the Panel) and is based on six General Principles. The Panel will review and monitor any takeover bid to ensure that each of these principles is considered and applied. Consultation with the Panel throughout the process is required.

There are two customary methods to undertake the takeover of a UK publicly listed company:

Under a takeover offer, the bidder will make an offer to all of the target shareholders via an offer document which includes details of the bidder and the bid. The bidder will be looking to obtain acceptances from 90% of the shareholders (by number and voting rights) as this will allow it to use the statutory 'squeeze out' process under the Companies Act 2006 to compel the remaining shareholders to sell their shares.

A scheme of arrangement in contrast, is a statutory mechanism governed by the Companies Act 2006. It is undertaken via a court approved process which requires that the 'scheme' must be approved by both the shareholders of the target and the High Court. The target must hold a general meeting at which a majority in number of the target's shareholders representing at least 75% of the target shareholders' voting rights of those voting at the general meeting need to approve the scheme. If this happens and the High Court then approves the application, the bidder will be able to automatically acquire 100% of the target's shares without undertaking any 'squeeze out' process.

A scheme of arrangement is often considered the most effective takeover structure (as once approved by the requisite number of shareholders and the Court it automatically enables the bidder to acquire 100% of the target's shares). As a result, around two-thirds of UK takeovers are completed using this method.

There are a number of factors which have contributed to the increased use of P2P transactions by private equity. First and foremost, it would appear that that private equity firms have become more comfortable and confident operating under the Code. The Panel, which was once considered a formidable unknown, is generally now seen as a facilitator of transactions rather than a hurdle to them. In addition, the regulatory changes, implemented as a result of the protracted 2011 Cadbury/Kraft takeover, have created a more level playing field between bidders and targets which, in turn, has generated more interest in these types of transactions.

In addition to this shift in perspective, in recent years the market itself has made such transactions more attractive. Record level private equity funds, low interest rates, a scarcity of quality privately held assets off the market (and increased competition for these assets) and vendor price expectation has combined to lead to an increased interest in public market transactions. Added to this, the volatile public market (in part resulting from Brexit and most recently Covid 19) has led to a perception that there are a number of undervalued assets on the public markets which private equity sponsors can take advantage of in any bid process.

In addition to the increasing private equity presence in the P2P arena, including Sovereign Capital Limited's acquisition of Murgitroyd Group PLC for £65 million in December 2019 and NorthEdge Capital's acquisition of Catalis Group for £90 million in October 2019, 2020 has seen the emergence of 'PIPE' transactions, private investment in public equity. In May 2020 Clayton, Dubilier & Rice announced its £150 million investment into SIG plc (one of the first PIPE transactions in the UK since 2009) which resulted in CD&R becoming the cornerstone investor with two seats on the board and a 25% interest in SIG plc. The investment in SIG plc is an indication that private equity houses may look to build stakes in a target going forward in order to increase the likelihood of success in any future takeover bid.

There are a number of key differences between public takeovers and private transactions including the approach to warranties and indemnities (in short bidders shouldn't expect any), and due diligence which is frequently conducted at a higher level than would usually be seen on a private transaction. The division between ownership and control of any listed entity makes it very difficult to obtain meaningful recourse from the sellers of a listed company.

The role of insurance in any P2P transaction has therefore become of interest. Putting insurance in place on a public to private transaction is not without its difficulties. For example, the confidentiality rules mean that an insurance broker is unable to approach a large number of potential insurers in order to increase competitive tension. Furthermore, as due diligence and disclosure are not completed in the usual manner it can be difficult to obtain wide coverage for a bidder. However, insurers are advising that these issues can be bypassed by taking out synthetic cover, whereby the insurer offers warranties under the policy, or by putting insurance in place shortly after the completion of any P2P transaction.

The reality for private equity houses is that whilst protection may be narrower and potentially more expensive to put in place, there are two key advantages to consider:

W&I insurance can therefore play an important role in helping private equity firms get comfortable with a transaction of this nature and allow the transaction to take place within acceptable risk parameters.

Despite the increased popularity of P2P transactions and their appeal within the private equity market, they do not come without risks.

There are very strict confidentiality rules in place to ensure that information regarding a possible offer is not leaked. The Panel are keen to avoid the creation of a 'false market' in the target's shares so will likely require an announcement to be made if:

Following the Kraft/Cadbury takeover the "put-up-or-shut-up" rule was implemented in the UK which requires any bidder to make a formal offer for a target within 28 days of their involvement becoming public.  As a result, if a bidder is forced to make an announcement due to a breach of confidentiality, the entire takeover process will be significantly accelerated.

Bidders should be aware of the Panel's specific focus on the future intentions for a target business. A bidder will need to disclose any proposed changes to employees, management teams, the target's headquarters, pension funds, the research and development function etc. when it announces its firm intention to make an offer. In addition to this, one year after completion, the bidder will need to confirm to the Panel whether it has taken the intended course of action. Such confirmation will be published and there could be reputational damage for any bidder if these intentions have not been met (especially if the intentions may have influenced a vote in favour of the transaction at the time).

The Code requires that future incentive arrangements between a bidder and the target management team are disclosed and approved by the shareholders of the target. For private equity houses particularly, disclosing such arrangements to the public can be an unattractive prospect and, as a result, it is customary for equity incentive arrangements to be implemented after completion. This results in a different dynamic between the private equity sponsor and the management team of the target during the course of the transaction. It is more difficult for the private equity sponsor to build deep, early relationships with management and to discuss future growth prospects for the stakeholders in the bidder. It should also be remembered that the management team, if they are also directors of the target, have ongoing statutory and Code responsibilities to their shareholder base.

The current economic environment provides challenges and opportunities across all M&A transactions and P2Ps are no different. For private equity specifically, record levels of capital commitments combined with the volatility in public company equity value provides an interesting opportunity for PE houses to invest some of this capital into potentially undervalued assets. In addition, the record-low interest rates in the UK present a chance for PE houses to secure financing at a cheaper rate. Finally, the weak performance of sterling during Brexit has encouraged foreign investment into UK companies. US private equity firms in particular have been seizing opportunities within the UK markets, one of the most high profile examples being US private equity firm Advent's £4 billion offer for UK defence group Cobham last year. This trend is likely to continue into the end of 2020 and beyond.

The Covid 19 global pandemic has inevitably had an impact on deal flow in this arena and key questions over deal structuring have been raised too, such as how can a target successfully hold a shareholders meeting to approve a scheme of arrangement? How will the High Court hear and grant any orders sanctioning a scheme? However, as always, the market adapts and already flexible solutions have been adopted.

The market environment, including the attractive (and potentially undervalued) share prices of some public companies, continued competition for privately held assets (and stubbornly high vendor price expectation) combined with new W&I insurance products, have all fuelled interest from private equity in public to private deals. This, added to the record size of private equity funds and increasing confidence in dealing with the Panel lead us to conclude that private equity will continue to search for value in the UK public markets.

Please contact Ciara Healy or Alasdair Outhwaite for further information on how DWF can assist with any P2P transaction. 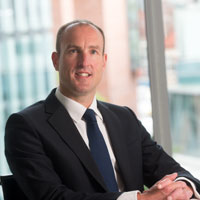