DWF, the global legal business, has today published its Gender and Ethnicity Pay Gap Report for 2020, which includes information on its ethnicity pay gap for the first time, in line with set targets on gender and race.

Helen Hill, HR director at DWF, said: "We are continuing to make progress year on year to narrow our gender pay gap, but there is still much to do. The reduction in the combined mean pay gap for a third consecutive year is a positive indicator that our actions are having an impact. Elsewhere, the representation of females in our upper pay quartile has increased for the third year running and in 2020, more women than men received a bonus.

"However, the slight movement in our median pay gap is a powerful reminder that the pay gap is largely the result of having more men at senior levels in higher paid roles and a higher proportion of women relative to men in roles that fall within our lower pay quartiles.

"The composition of our workforce is changing, but as with most large businesses, there are fewer leadership roles and often slower turnover at senior levels. This will undoubtedly affect the speed with which our gender pay and bonus gaps reduce over time.”

For the first time, and as part of a commitment to transparency and meeting target promises, DWF is reporting its combined ethnicity pay gap, which includes employees and partners in England and Scotland who have volunteered their diversity information. This is currently 23 per cent (mean) and 22 per cent (median). DWF's combined ethnicity bonus gap is 22 per cent in mean terms.

Helen added: "It is important to acknowledge that across the DWF Group, we know we are not where we need to be in terms of female and BAME (Black, Asian & Minority Ethnic) representation at senior levels. We recognise that reducing our gender and ethnicity pay gaps requires a sustained effort at every level of our business, and at every point in the employee life cycle, from attraction and recruitment through to development, succession planning and promotion.

"We believe our sustained focus on our targets will result in a more-diverse workforce, supported and empowered by our inclusive culture and values." 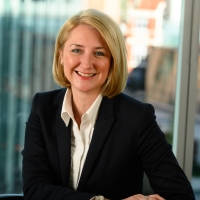