Many public bodies will welcome the announcement by the UK government of the first three Streamlined Subsidy Schemes.  Read our latest insight to find out more.

The Department for Business, Energy and Industrial Strategy has published three Streamlined Subsidy Schemes which, provided the conditions set out in the relevant Schemes are observed, will be capable of being used in future by all UK public authorities to award subsidies in a compliant way and without needing to apply extensive individual analysis.  In this way the Streamlined Subsidy Schemes will act in a similar way as so-called "block exemptions" are used in EU State aid law.  On 9th January 2023 these were laid in Parliament starting the process for these to come into law.

What are Streamlined Subsidy Schemes?

Which Streamlined Subsidy Schemes have been published?

Three Streamlined Subsidy Schemes have been published and laid in Parliament. These are for:

Are the Streamlined Subsidy Schemes in force at this time?

What does the Local Growth Streamlined Subsidy Scheme allow?

There are multiple conditions in the Local Growth Streamlined Subsidy Scheme, but the main elements are:

Small and medium sized enterprises are defined by reference to the Companies Act 2006, i.e. where two or more of the following criteria are present:

A 'Start Up' is defined as a small enterprise that has been registered or started trading (whichever is the latter) within 5 years of the award of subsidy, has not distributed any profits and has not been formed through a merger with another entity.

What does the Research, Development and Innovation Streamlined Subsidy Scheme allow?

There are multiple conditions in the Research, Development and Innovation (R&D&I) Streamlined Subsidy Scheme, but the main elements are: 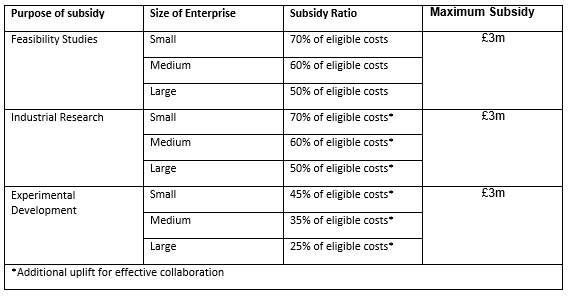 The notions of qualifying feasibility study, industrial research and experimental development appear to be defined in similar fashion as for the EU State aid exemption for R&D&I, and generally reflect the need for greater level of support to those projects that are more speculative and further away from commercialisation.

What does the Energy Usage Streamlined Subsidy Scheme allow?

There are multiple conditions in the Energy Usage Streamlined Subsidy Scheme, but the main elements are: An energy demand reduction project involves the installation of energy efficiency measures, low carbon heating measures or additional energy infrastructure.  A green heat network is defined as delivering thermal energy with an average annual carbon intensity of no more than 100g of carbon dioxide, and equivalent emissions, per kWh of thermal energy delivered to customers.

How do the new Streamlined Subsidy Schemes compare to the General Block Exemption Regulation in EU law?

Under EU State aid law, around 95% of measures proceeded on the basis of compliance with the General Block Exemption Regulation.  A policy decision has been made by the UK Government to have only a few limited exemptions in the new Subsidy Control regime, in order to encourage public authorities to make use of the Subsidy Control Principles route (ie. individual examination to the facts and circumstances case by case). On this basis then the three Streamlined Subsidy Schemes published to date cover a much narrower range of potential subsidies for the time being.

This offers flexibility, particularly because the Subsidy Control Principles are geared to general notions but always applied with proportionality to the circumstances of each case and without the same hard and fast limitations.  At the higher value end the new rules have now built in that the highest value subsidy awards (ie. those of £10m+ and some others in specific sectors of lower value) must go to the CMA before they are awarded.

However at the lower value end the new rules mean that many low value awards require an assessment against the Subsidy Control Principles rather than go through quickly under previous block exemptions. Paragraph 1.43 of the recently published Statutory Guidance suggests that such examinations should be proportionate to the value of the award, but this is not a clear legal standard and such an assessment will almost always be more time intensive than checking against specific and precise conditions.

For this reason, many public bodies will welcome the announcement of the first three Streamlined Subsidy Schemes but will hope to see more soon to widen the coverage.

DWF is a leading law firm for Public Sector matters.  If you require any advice on this issue please contact one of our experts.