It is a year now since the country first entered lockdown which at once seems to have gone in a flash and lasted for an eternity. Who would have thought when we left offices in a manic rush a year ago that we still would not have returned to our 'normal' working patterns? Who even knows what normal is now? Statistically, COVID continues to fall drastically in terms of infections, hospitalisations and deaths, with over 50% of the adult population now given their first dose of the vaccine. Schools have returned but the impact of that will probably not be felt for a few weeks.

I'm sure you've also received our update on the whiplash reforms. Compensators and claimant representatives are now working hard to have procedures and processes ready for the 'go live' date of 31 May 2021 and we will continue to support you in that regard.

In addition to the usual portal data, the MOJ have produced their quarterly statistics for October to December 2020 and we continue to look at the transport and ONS data to see if habits are changing as the COVID cases reduce.

Since the publication of the rules there have been a number of webinars from the MIB and MOJ. The sessions have been particularly noteworthy for the record-breaking number of questions asked – approaching 200 at the MIB session. Perhaps reflecting the concern at several aspects in the new rules.

In terms of things to come, speaking at the MOJ webinar on 11 March, the MOJ's David Parkin stated that the user guide would be made available "in the next few weeks". The guide will, amongst other things, provide unrepresented claimants with guidance on valuing non-tariff injuries and claiming an uplift for" exceptional circumstances". Both look destined for judicial determination at some point, along with what constitutes a "minor psychological injury" and the thorny question of reasonable belief when trying to value a claim at the outset.

He went on to say that the MOJ will be establishing some governance around the new portal in the form of an advisory body which will be managed by MOJ but will feature on it representatives from the claimant and defendant bodies and a representative from the Civil Procedure Rule Committee, so there will be input and opinion on the operation of the service from all areas of the industry
The MOJ also confirmed that it remains the government's intention to increase the Employers' Liability and Public Liability small claims limit from the current £1,000. At the same webinar, it was said that ministers are currently looking at all their options for the future in EL/PL and will be deciding on that and communicating their intent in the coming months.

At the MIB webinar on 2 March it was suggested that the industry will be allowed access to the system and see the screens in action. This will enable the testing and training processes to be finalised – a crucial part of implementation that is urgently needed to accompany the rules. But it is not clear yet precisely when that will happen.

This week we have seen a few items making headlines – firstly New Law have indicated they are likely to charge clients 20-30% of their damages under a DBA when not covered by an LEI policy. Secondly, the Insurance Times reported this week on fraud concerns around the new OIC portal in their first Fraud Charter event of the year, a virtual roundtable. The role of CMCs in the process seemed to be the main concern and the extent of their influence on the claims market.

The MOJ responded and the Committee concluded that it was clear that these matters had been fully debated during the passage of the 2018 Act and the issues had been decided by Parliament at that time. They noted that illustrative tariff rates had been available when the Bill was in progress, and so the House had been clear that it was agreeing to a substantial reduction in awards. They also noted that the Act includes a number of provisions which require a review of how the scheme operates and that it can be modified if unintended consequences are found. The full report can be found here.

Interestingly the MOJ said this in relation to the suggestion that the tariff was well below Judicial College Guidelines: "It should be noted that the levels suggested in the JCG are generally higher than the amount that most claims settle for. This can be explained in part by the fact that the JCG is developed using outcomes of cases heard by the court. By default, the judiciary only hear more complex claims where there is significant dispute, and this can often result in higher awards for claimants. For example, the average pre-court settlement for a 9-month whiplash injury is currently around £2,500 but could attract an award of £3,710 if the JCG are used."

As a MedCo director I'm often asked what MedCo are doing in preparation for the reforms. Shortly after the rules were announced MedCo released this high-level process flow for the unrepresented claimant journey, which can be found here. 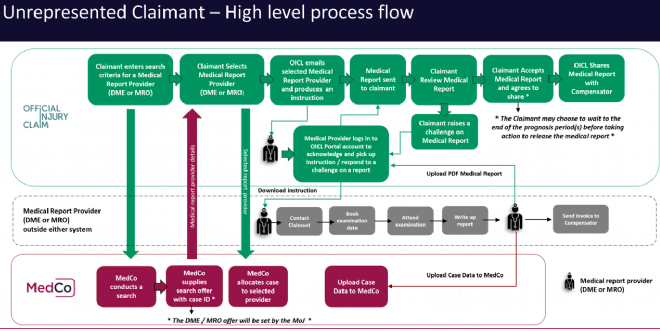 And last week registrations opened for MROs/direct experts to opt in to receive instructions for unrepresented claimants with an audit process set out to ensure experts and MROs are audited in advance.

Use of Transport Modes

We now have the transport data up to and including 15 March 2021, so after the return to schools on 8 March. Even that seems to have had an instant impact, with the use of private cars rising from 66% of normal on Monday 1 March to 72% on 15 March. 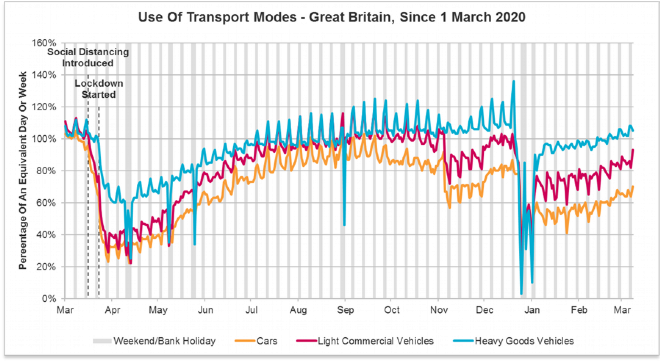 It is the first time that car use has reached that figure since December 2020 and the renewed lockdown followed. The combined ratio of cars, light goods and heavy goods vehicles reached 78%, also the highest for three months. Of course, back in September 2020 the level was regularly over 90% compared with pre-lockdown levels. We should see a more significant increase as we move towards the reopening of shops in April.

The return of better weather has also seen a return to the cycling increases experienced last year, with the weekend of 27 and 28 February seeing figures of 204% and 198% respectively, a considerable rise over previous weekends as cyclists dust off their bikes bought in the first part of lockdown, and so I think it's time to dust down the cycling graph once again. Bear in mind however that the comparison is always with the commencement of lockdown in March 2020 so an increase in summer compared to those levels is inevitable: 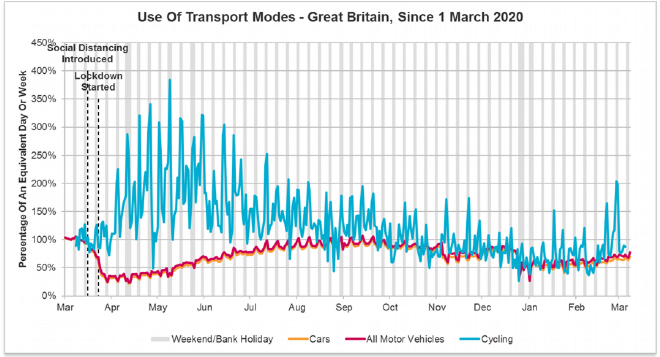 In terms of public transport, National Rail use remains low as the stay at home dictum is still in place. Whether that will change as travel is allowed across regions we will see. Bus and Tube use in the capital rose on 8 March as some children returned to school on public transport.

The ONS statistics are up to date as of 18 March and showed a couple of interesting points about the return to travelling to work and the slight increase in retail footfall: Coronavirus and the latest indicators for the UK economy and society.

The proportion of working adults in Great Britain who travelled to work (either exclusively or in combination with working from home) in the last seven days has increased by 5 percentage points to 53% in the week ending 14 March 2021, when compared with the previous week.

UK retail footfall volumes in the week to 13 March 2021 increased to 47% of their level in the equivalent week of 2020, an increase of 5 percentage points from the previous week
As we've said above it will be interesting to see the changes in both during April and what effect that might have on claims.

The number of hearings has remained broadly consistent with January's statistics but still well below the pre-Covid baseline. This is likely in part due to greater collaboration between parties settling claims rather than waiting for hearings, and in part due to fewer claims in the system.

We also have the full year Civil Justice statistics now showing the reduction in issued personal injury claims compared to the previous year.

However, the reduction is actually a similar trend to the previous 2 years and looking in more detail below one can see that the significant reduction in issued injury claims in Q2 of 2020 was followed by the strongest quarter since the beginning of 2018:

In terms of backlogs, as the report says, the mean time taken for small claims and multi/fast track claims to reach a final hearing is now 51.2 weeks and 73.9 weeks, 14.1 weeks longer and 13.0 weeks longer than the same period in 2019 respectively. The graph below illustrates this well: 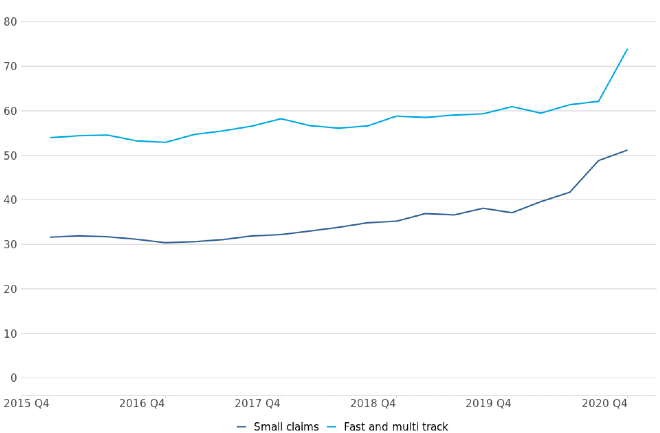 The number of new claims actually dropped in February compared to the previous month, although traditionally February tends to be lower compared to January due to February being a shorter month. However this year due to how the weekends fell in January there were in fact the same number of working days in each month.

New RTA claims fell by 11% to 33,533 in February, presumably reflecting the reduction in travel after the third lockdown took effect in January. When measured against February 2020, the numbers were down by 39.5% 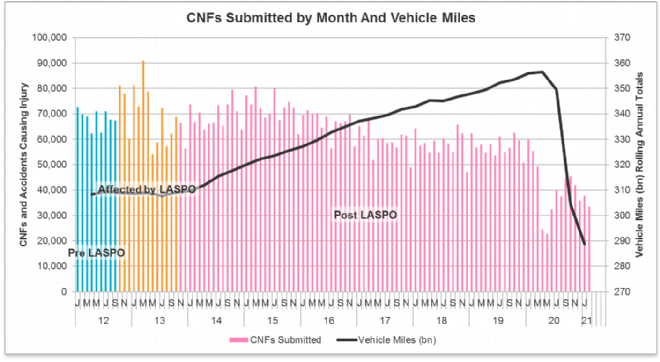 With February this year having the same number of working days as January the weighted graph shows the same reduction: 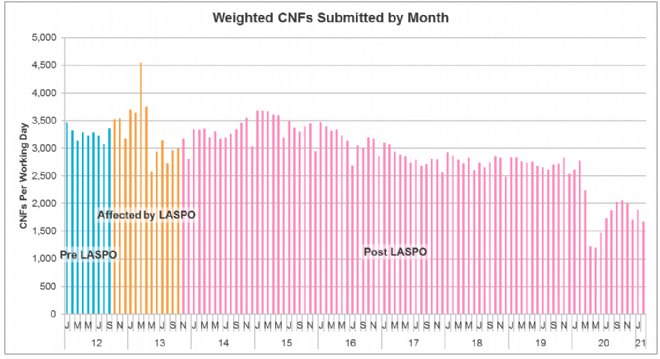 The long term downward trend continues now around 450,000 claims per annum and that should start to level out from March when the rolling 12-month figure settles down. From June we should see the claims split between the two portals. It will be interesting to analyse the portals together when the OIC portal launches and see the proportions of new claims in each. 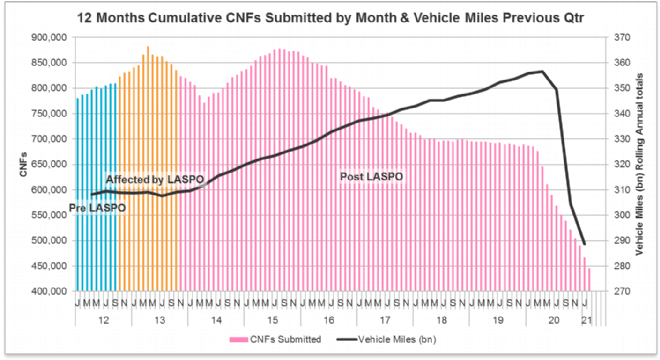 The MedCo factsheet for February shows the following:

Unlike RTA cases, EL cases rose slightly in February, with 1,502 new claims submitted to the portal, a rise of 8.9% on the prior month but still 23.9% down on the prior year.

PL cases saw the biggest month-on-month rise in percentage terms for quite some time, rising 55.4% with 1,671 new claims. We must remember however that we are dealing with very low figures for the prior month and the comparison with February 2021 was 36.8% down.

The figures for EL and PL may demonstrate that solicitors in this line of work are staying put, with the reforms not hitting this area, at least not for now. There will be no considerable numbers one would think until retail, hospitality and workplaces open up properly. The MOJ still appears intent on reviewing the small claims track limit for EL/PL claims at some point, although there doesn’t seem a great deal of appetite for this on anyone's part. 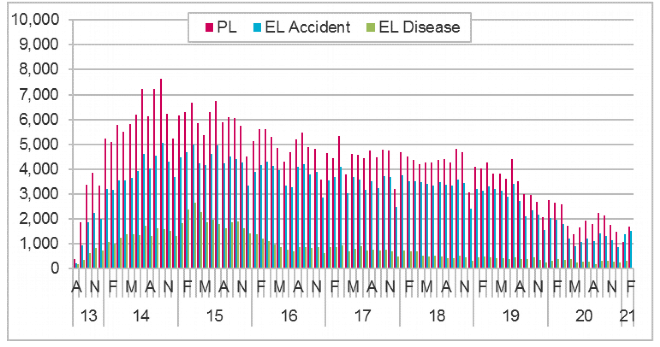 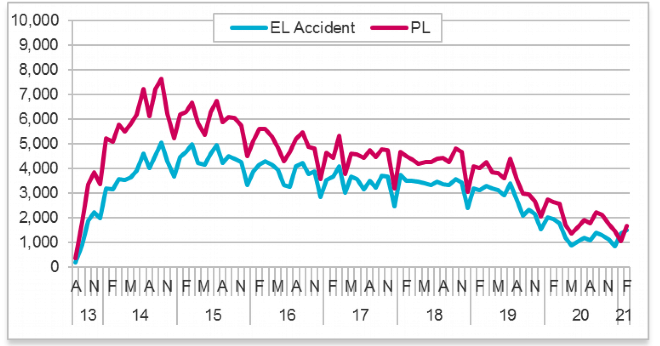 A mixed month for retention with RTA retentions dropping again but rises for EL and PL:

So whilst a lot of resource is focused on planning for the whiplash reforms, it is a bit of a waiting game at the moment in terms of claims volumes, with further steps on the roadmap out of lockdown on 29 March and 12 April likely to increase activity and in turn claims. The aim is to ensure that systems and processes are 'oven ready' for the launch of the OIC at the end of May and then one way or another it promises to be an interesting summer in the world of claims.

If you have any queries, please contact Nigel Teasdale.