The growth in the Islamic capital markets has seen the evolving of the structures that are used in Sukuk. According to the IIFM Sukuk Report of 2018, the Wakalah structure has become increasingly popular, and the number of Sukuk based on this structure has continued to grow.

This article was originally published on the International Islamic Financial Market, you can read it here >

Wakalah is akin to the agency relationship under the common law and/or civil jurisprudence.  Under a Wakalah, a principal, or Muwakkil, appoints an agent, or Wakil, to act on its behalf for the purpose of completing a specific task.

The terms and conditions of the Wakil should also be clearly outlined in the Wakalah contract, including his duties and what role he will be playing with respect to the subject matter of the Wakalah.  The Wakalah contract should state the duration of the Wakalah, the amount of investment (if any), and under what conditions it will terminate.  With respect to remuneration, any profit in excess of the agreed upon profit will be kept by the Wakil as a performance or an incentive fee. It is on the basis that a Sukuk Al Wakalah is structured.

Like other Sukuk, Sukuk Al Wakalah involves the issuance of certificates, or Sukuk. In the case of Sukuk Al Wakalah, the proceeds from the issuance of the Sukuk are utilised to acquire Shari'ah compliant assets or invest in Shari'ah compliant projects or businesses. The Wakil manages the funds in order to generate a profit.  However, the amount of profit that is generated pursuant to a Wakalah arrangement is not guaranteed. Sukuk Al Wakalah usually includes an investment strategy (similar to a mudaraba structure) and the Wakil is required to manage the investments in compliance with the said strategy.  The profit amount is used to pay the periodic distribution payments to the investors ("Sukukholders") (discussed below).  The Wakil is eligible to receive an incentive fee from the amounts in excess of the agreed upon profit. 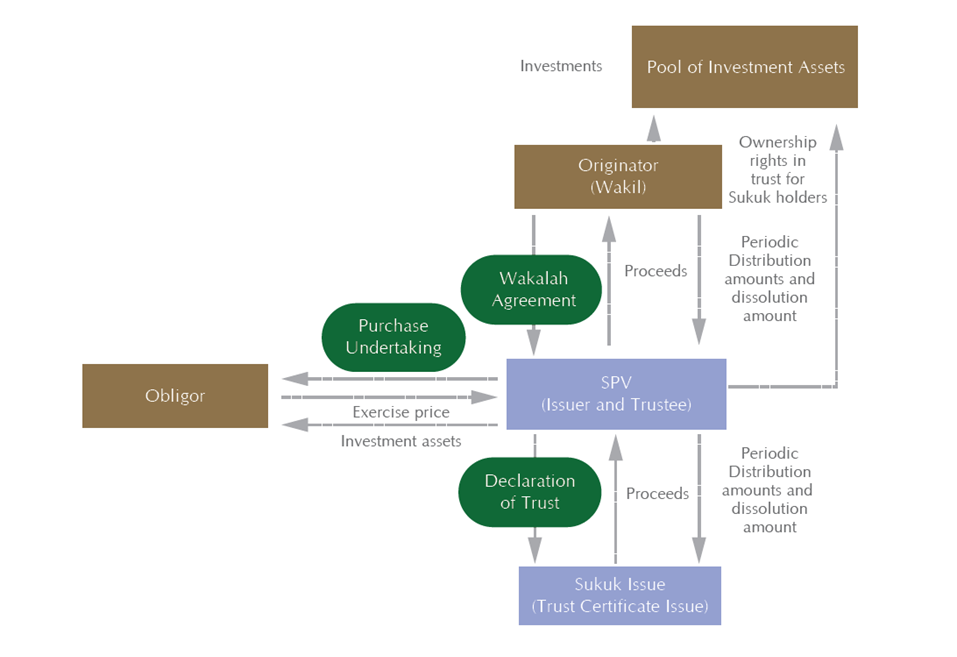 At the outset, the originator of the Sukuk establishes a special purpose vehicle ("SPV") which issues Sukuk certificates to investors or the Sukukholders.  The Sukuk represent an undivided interest in the Wakalah assets and grant the Sukukholders the right to periodic distribution amounts.

Separately, the SPV enters into a Wakalah arrangement with the originator of the Sukuk and appoints the originator as a Wakil.  The Wakil is appointed to invest the funds obtained from the issuance of the Sukuk in Shari'ah compliant assets or projects, which is usually the business of the originator on behalf of the SPV, and generate profit.  The Wakil will remit back to the SPV the pre-agreed amount from the profits earned from investing the Wakalah assets. Any excess from the profit amount will be for the Wakil to keep as an incentive fee.

The profit amount is used by the SPV to pay the periodic distribution to the Sukukholders.

In order to safeguard the Sukukholders' interests, the SPV and the originator will enter into a purchase undertaking whereby the SPV has the right to require the originator to purchase a portion of or all of the Wakalah assets.  The exercise price under the undertaking will be equal to the dissolution amount that is payable to the Sukukholders. Generally, the right to require the obligor to purchase the Wakalah assets may be exercised in the event that the SPV does not have sufficient profits to make the periodic distribution amount, if there is a default under the Sukuk transaction, or on the maturity date of the Sukuk.

A common work around on the above-mentioned restriction is requiring the originator to act as the guarantor (the "Guarantor") for the amounts due under the Sukuk.  The Guarantor will be obligated to make-up any shortfall between the amounts collected from the Wakalah assets and the amounts due to the Sukukholders, whether during the liquidation of the entire Wakalah assets or the periodic distribution payments.

In the context of Sukuk, the standard Wakalah contract is called Al Wakalah Bi Al Istithmar.  Under the Al Wakalah Bi Al Istithmar, the Wakil is appointed to invest funds provided by the Muwakkil into a pool of investments or assets, and the Wakil manages those investments on behalf of the Muwakkil for the duration of the contract.  The Wakil would usually follow an investment strategy for the purposes of investing the funds and making a return.

Generally, the following documentation will be required in a Sukuk Al Wakalah:

Sukuk Al Wakalah are growing in popularity as they offer significant flexibility, and can be adapted for the use by various issuers and different asset classes. Given their mutable nature they are continuing to become popular with both the issuers and the investors, and we expect to see an increase in Sukuk issued based on Wakalah structure.

There are several advantages to the Sukuk Al Wakalah structure.