Claims Portal has released their MI for the month of March which completes the picture for the year 2018/19. We analyse it below for the latest trends.

New claims intakes in the month of March were up across RTA, PL and EL, though in all cases by a margin which was less than the effect of an additional day's working time in the longer month of March. The increases were 3.0% with RTA, 1.4% in the case of PL and 1.2% for EL, all less than the 5.0% extra time.

Longer term trends for new RTA claims show clear stability: this has now been the case for the last 12 months over which these longer term measurements have shown 6 monthly increases to be set alongside the same number of monthly falls. Overall the reduction over 12 months for RTA is a nominal 0.05%.

The year to 31 March favoured by the DWP for their data (the release of which for 2018/19 is still awaited) shows 696,258 new RTA claims, a token reduction only of 2,496 or 0.4% from 2017/18 levels. This can be contrasted with a reduction of 12.0% in the annual data seen at this stage a year ago. New RTA claims levels are currently particularly stable despite uncertainties from the incoming reforms.

EL and PL longer term trends are currently pointing more towards the negative. EL shows a reduction of 1.7% over the last year and PL demonstrates a fall of 2.6%. While both have seen some monthly increase in numbers in the last 12, those months are outnumbered by others showing monthly decreases.

EL disease claims show substantial and increasing rates of declining usage of that portal both in the data for the month of March and longer term.

There is increasing stage 3 usage this month with both RTA and PL, though EL has declined. Proportionately stage 3 use remains at around 30% for RTA and at around 10% for PL/EL.

The 15th edition of the Judicial College Guidelines is currently expected in September and is particularly anticipated in the case of RTA claims in view of their impact on non-tariff injuries in cases involving whiplash injury which are affected by the incoming Civil Liability Act reforms.

PSLA levels in RTA are reduced for a third consecutive month to the lowest level since April 2018 as the focus for claimant operations may currently lie away from damages levels. Current increases over where quantum stood at the time of the 14th edition are only 1.2% for RTA, 1.4% for PL and 2.9% for EL where the guidelines themselves proposed increases of 4.8%. 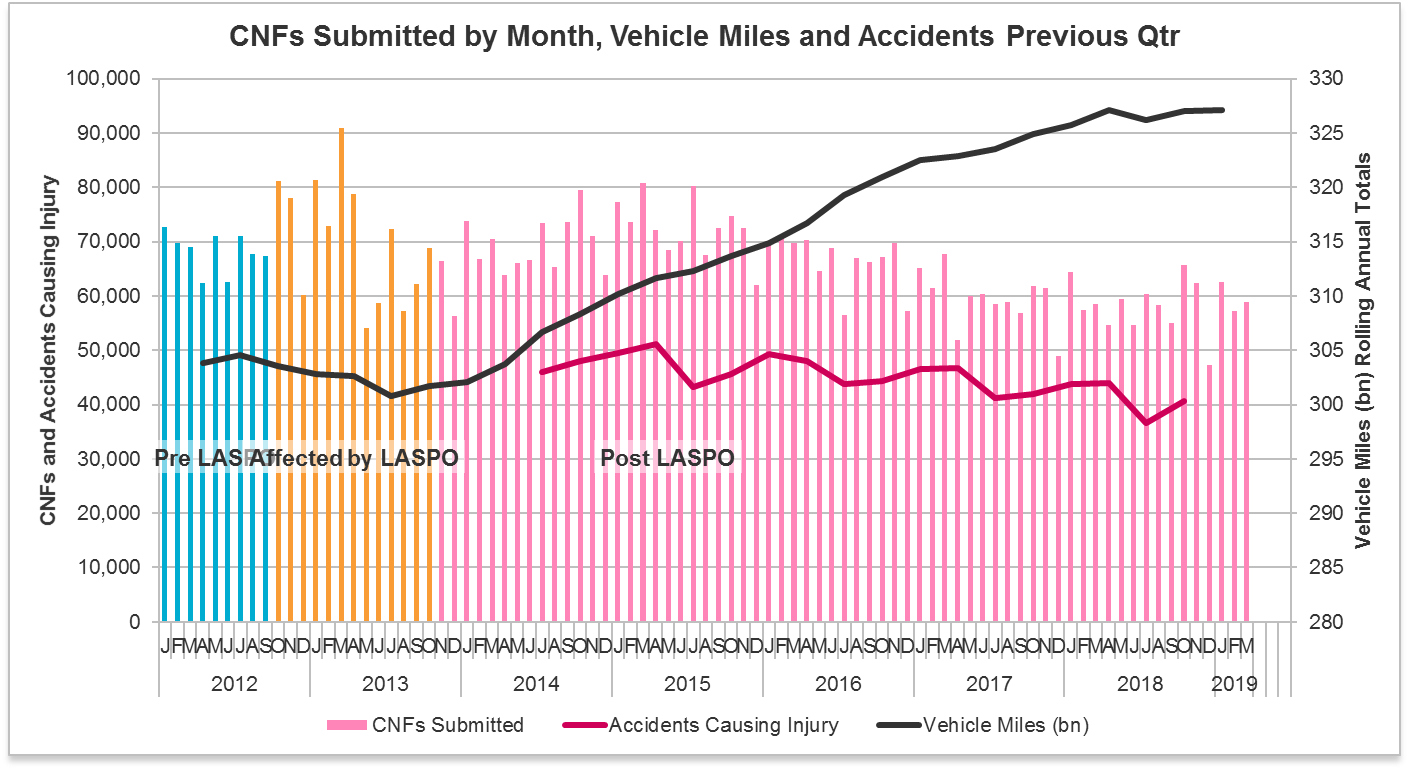 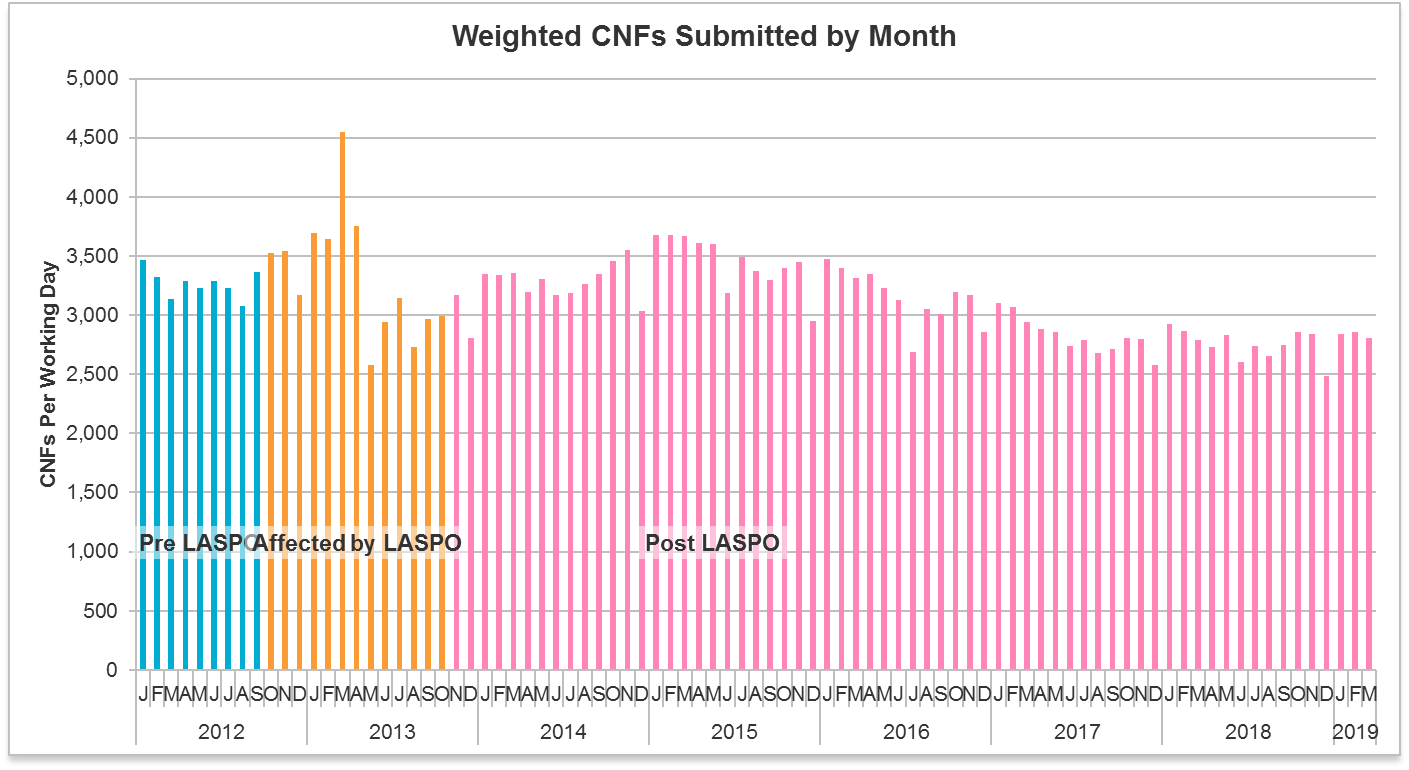 With the exception of December, the period between October 2018 and February 2019 had shown an increase in the daily intake of new claims back towards the level seen at the beginning of the calendar year 2018.   Adding the data for the month of March makes it more slightly more difficult to see a continuation of that trend.

There remains no short-term prospect of an increase in the daily number of new RTA claims back over 3,000, a level last seen in the initial months of 2017. 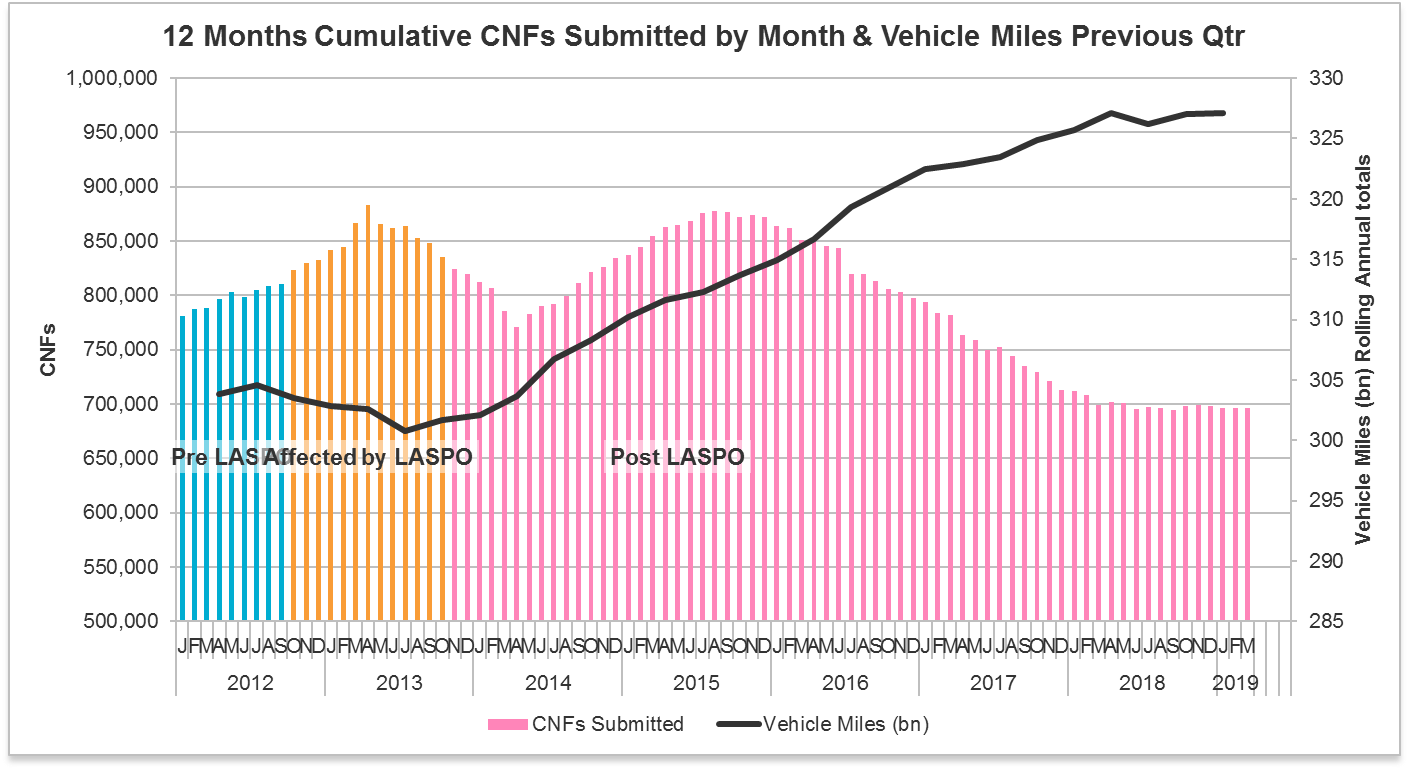 Looking at longer term trends on the 12 month cumulative basis, we see from the graph above that the picture of stability which began in March 2018 has now extended for 12 months.  Over that period there have been 6 monthly increases, and 6 monthly decreases.

As to the operation of the portals, it is fair to recognise that the opportunity to see stabilised data is more clearly found with the RTA portal and its higher levels of claims handled within it, but at the same time it is nevertheless clear that the factors that might have caused either an increasing or a decreasing trend as has been usually found even with the RTA data in the past, do not currently exist.

It seems to be the case that the RTA market is currently able to operate in such a way that notwithstanding the forthcoming changes to be introduced by the Civil Liability Act and the associated Small Claims Track reforms, that RTA claims have continued to be presented in broadly equal numbers over the last 12 months.

We have now concluded the accounting year to the end of March 2019 as used by the DWP in their annual CRU claims data. The 2018/19 portal total reached 696,258 new RTA claims.

The 0.4% reduction is what we were anticipating to be the concluding position for 2018/19 when looking at the data as it then stood at the end of February.  We expected then that there would with the addition of March's data be a nominal reduction when 2018/19 finally closed, and so it has proved.

As the preceding graph shows, when 2017/18 was compared to the prior year of 2016/17 there was a sizeable fall of 12.0%.  The comparison which we can now make between 2018/19 and the previous year should again be seen to point towards a stable level of the intake of new claims between the two accounting years, both below a figure of 700,000 by only a small number of claims. 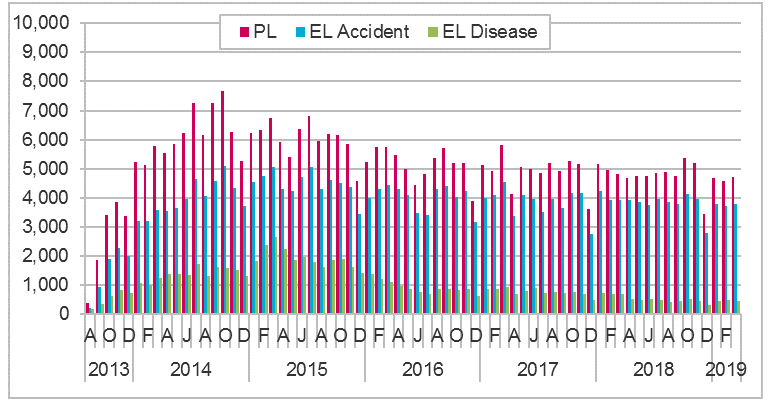 March saw 3,786 new EL claims, an increase of 1.2% over the 3,742 which entered in February. The increase is again less than the additional working time available however.

There were 431 new EL disease claims in March.  Even with the increase in working time there is a decrease which in fact represents a decrease of 10.0% over the month. 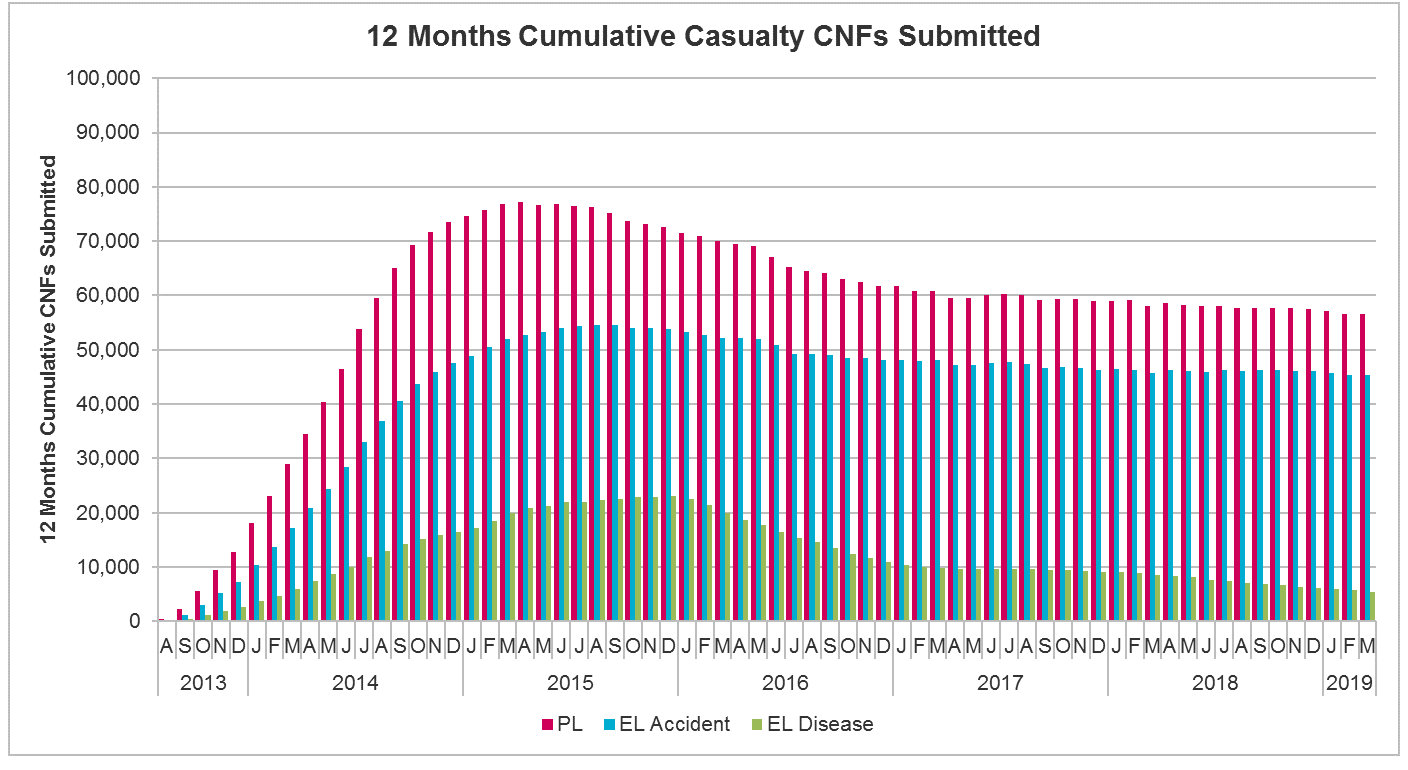 Looking at longer term trends on the 12 month cumulative data, adding the March intake shows 56,576 new PL claims during the last year, which represents a 0.2% fall from the 56,677 seen over the 12 months to the end of February.

The average monthly decline during the calendar year 2018 was 0.2%.  3 months into 2019 the average monthly fall is now 0.6%, still 3 times higher, suggesting a faster rate of decline in the early months of this year.

On the same cumulative basis up until the end of March, there were 45,277 new EL claims, which amounts to a reduction of 0.3% over the position as at the end of February when the number stood at 45,420.

Over the last 12 months there has been a decrease on this longer term measurement of 1.7%, and over those 12 months we have seen 4 monthly increases but 8 monthly decreases. Comparing 2018/19 to 2017/18, the rate of decline has slowed, because over the earlier period the reduction was 4.9%.

The 2018 average decline on this measurement was a nominal 0.2%, whereas it is now somewhat greater at 0.6%, the same level as for PL.

On the same form of assessment there were 5,449 EL disease claims over the 12 months to the end of March, a reduction over the month of 4.5% from 5,704 where the data stood at the end of February.

Over the last 12 months there has been a decline on this means of assessment of 32.7%, with every month showing a decrease for over 3 years. The rate of decline has increased because over the prior 12 months, in 2017/18, the decrease was 13.3%.

In March we saw an increased retention rate in RTA, but falling rates in all 3 casualty portals, significantly so in the case of EL disease.

Looking at the 12 month cumulative data for longer term trends, we see marginal increases across the board.  RTA is now approaching 55%, EL has increased to 30%, PL has risen to 23%, while EL disease has been raised to 10%.

Both of the above graphs assume that claims proceeding to stage 3 should be regarded as included within the portal process. See also the comment made at the conclusion of this update as to the new means by which Claims Portal is presenting its data this month.

March saw 6,083 RTA claims in which a court pack was prepared as a preliminary step to use of stage 3.  This constitutes a rise over the month of 14.3%.  It should, however, be recognised from the graph above that the data has been volatile over the last 4 months.  Indeed, we saw last month a 14.1% decrease from January's level.

The average general damages level in March was £2,827, a decrease of 0.2% over the month from a prior level of £2,833.  This is the third consecutive monthly fall, and March's number was the lowest for nearly a year since April 2018.

The current level is now only 1.2% above November 2017, when the 14th edition of the Judicial College Guidelines are thought to have started impacting. Those of course recommended average PSLA increases of 4.8%.

Work is currently ongoing say the Oxford University Press on a 15th edition of the Guidelines, which are expected to be published by them in September of this year.  The level of damages for non-tariff injuries lasting up to 2 years in claims where there will also be a whiplash element the value of which will be assessed on the tariff will be important where adverse behaviours from claimant operations may otherwise limit the anticipated effect of the reforms. There is reason to say that the value of non-tariff injuries should be calibrated in the light of the approach taken to the setting of the tariff for injuries falling within it.

There does not seem to be from this evidence a current focus on the part of claimants' representatives to maximise damages, rather the focus of their current efforts appears to lie elsewhere such as in relation to costs and disbursements.

In the case of PL, there were 82 court packs in March, the same number as in January, after a decrease to 66 in February.  March is the equal fourth highest month to date for PL court packs. The average number of PL court packs during 2018 was 67, so March was 22.4% above that level.

Over the month RTA proportionate stage 3 usage has increased back to the level of 30%, while PL has increased to 12% at the same time as EL has fallen to 9%.

In broad terms, over the last 12 months or so, RTA stage 3 usage has remained at around 30%, with EL and PL at around 10%. That is, use of stage 3 is 3 times more popular in the RTA portal than it is in the main 2 casualty portals.

Presentation of the data

For the first time since the portals were established, Claims Portal has moved to an alternative means of presenting their monthly data for the 4 Portals this month. There is a new dashboard, with monthly totals for key data, together with rolling numbers representing totals over the period since each portal opened.

3 principal graphs are seen as important by Claims Portal, these are for CNFs entering each portal presented on a rolling 12 months basis, court packs submitted, and average general damages levels. All of those are criteria analysed in our monthly reports as in this update.

It has to be said that there is some divergence on certain points between the data as now presented, and as it appeared when first presented under the old MI system. Whilst some of the graphs presented in this update as based on the new MI contain some minor differences with those graphs previously drawn up on the basis of the former system of data collection, the differences are not significant to the overall conclusions of the update.