Sentencing Guidelines for Health and Safety Offences - Three Years On

Three years on from the introduction of the Sentencing Guidelines for Health and Safety Offences (the "Guidelines") fines remain at an all-time high, as do custodial sentences for individuals. This serves as a reminder to businesses that their duties under health and safety legislation should not – and cannot – be overlooked.

Merlin Attractions  started the ball rolling in 2016 with a fine of £5 million for breaches of health and safety legislation, leading the way for levels of fine that had never been seen before in the health and safety arena.

2017 / 2018 saw a small increase in the number of fatal injuries in British workplaces to 144. With the number of workplace fatalities starting to slowly rise again, the Courts have continued with their previously seen approach to sentencing with significant numbers of fatal and non-fatal cases attracting fines over £1 million. The highest fines awarded in 2017 / 2018 ranged between £1.4 million and £3 million.

The table below shows the highest fines over the past 12 months. 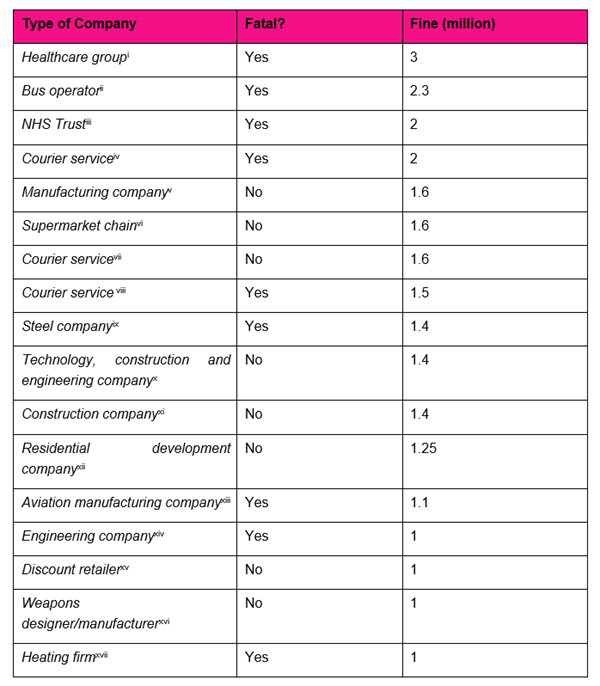 The highest fines awarded in 2016 / 2017 ranged between £1.35 million and £3 million. If you compare these figures, it is evident that as predicted when the Guidelines were introduced, the Courts have not shied away from imposing high fines for businesses where there has been a breach of health and safety legislation.

However, despite the initial dramatic increase in fines, last year has seen a levelling out of the total level of fines handed down. 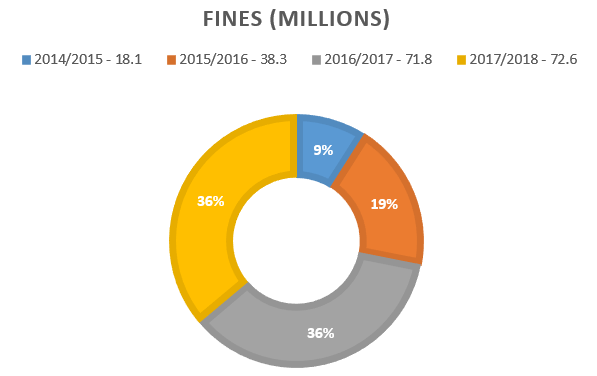 Fines accounted for 76% of sentences handed out last year but the Courts also exercised their power to impose custodial sentences for individuals where necessary. 7% of all of those individuals sentenced received an immediate custodial sentence and 9% received a suspended sentence. This confirms that directors and senior managers are under greater scrutiny than ever as the HSE continue to display increased determination to prosecute individuals.

Following the introduction of the Guidelines, it was also predicted that advice to duty holders would change. Businesses, who may previously have pleaded guilty for commercial reasons and in order for the case to be dealt with in the Magistrates' Court, where financial penalties were often lower, may now instead be advised to test the prosecution evidence in either the Magistrates Court before a District Judge or in the Crown Court before a jury, as there is more at stake by way of a financial penalty.

Given that the Magistrates Court has the same sentencing powers as the Crown Court, there can, sometimes, be a benefit in seeking a trial in the lower court and putting the Prosecution to task in proving their case. If this fails then the possibility of an appeal to the Crown Court is much more accessible and feasible than to the Court of Appeal.

A guilty plea on commercial grounds is now not such an attractive proposition given that the District Judges in the Magistrates Court are now flexing their powers and wielding quite substantial fines. To take an example from the above table, Atomic Weapons Establishment was fined £1 million at Reading Magistrates' Court when an employee suffered burns, showing that the Magistrates' Courts are just as willing as the Crown Courts to impose the highest fines for breaches of health and safety legislation.

The increased use of more aggressive tactics by defence solicitors may have impacted the number of prosecutions brought last year by the HSE and the Crown Office and Procurator Fiscal Service.
The precise number of prosecutions brought last year totals 517, compared to the 696 cases prosecuted in 2015 / 2016. This also represents a decrease of 16% from the previous year and is the lowest number in 5 years.

Does this represent a fairer approach by the HSE, with a more realistic and pragmatic approach being taken to their prosecutions?

Hopefully we will see this trend continue in the coming year, albeit the HSE's conviction rate remains consistent with convictions being secured in 493 of the 517 prosecutions. This means that the conviction rate has remained steady for the last 5 years between 93-95%, although these figures count as a success where the HSE secure a conviction for only one offence and does not include cases where charges have been withdrawn by the HSE after inception.

The intention of the Guidelines had been to introduce more certainty to the sentencing exercise but the last 3 years have demonstrated that to date, uncertainty remains and the Courts do not always get it right.

The Guidelines have undoubtedly impacted the way that the Courts sentence both businesses and individuals with the size of fines and the number of individuals being awarded custodial sentences continuing to rise. The good news is that we have not yet seen Merlin knocked off the top spot and the Courts appear to have reached a plateau in their sentencing and the levels of fines awarded.

Advising a business on the anticipated level of any fine likely to be received continues to be a challenging and unpredictable exercise, however with the passage of time, it is becoming easier to spot and analyse the trends.

Despite the above, 2018 did see the Court of Appeal showing an increased willingness to intervene where the lower Courts have got it wrong, stepping in to re-adjust fines on appeal where it has been argued that they are excessive for various reasons; and sometimes by a significant proportion. One of the most notable instances here being Electricity North West Ltd, who appealed and saw their fine reduced by 85% from £900,000 to £135,000. The Court of Appeal held that the lower Court had erred in their assessment of culpability and their decision to make an upwards adjustment due to the company being 'very large', which saw a significant difference in the sentence starting point. A case like this may also prompt the HSE to reassess their prosecutions with more 'reasonable' levels of culpability and harm from the outset as they try and be more faithful to the evidence and pragmatic. This may be of some reassurance in a time where fines are routinely hitting the £1 million mark for both fatal and non-fatal offences.

Nonetheless, it is clear that three years on from the introduction of the Guidelines, health and safety issues remain a serious boardroom issue and businesses and senior managers should continue to take preventative action to minimise their risk of financial and personal exposure.