At the end of last year the Ministry of Justice released its quarterly litigation data for Q3 of 2018 which showed a further reduction in the number of personal injury claims which reached the stage of issuing court proceedings.

It is worth looking at the numbers in some detail and contrasting them with the MI from Claims Portal which shows a currently steady intake both of RTA and PL claims over the last 8 months as well as stable numbers of EL accident claims over the last 14 months, albeit that data also demonstrates an ongoing reduction in the number of EL disease claims.

The latest quarterly data from the MoJ as to the overall number of claims moving into legal proceedings includes data for issued personal injury up to Q3 of 2018, the results being on the graph above.

In their headlines, the MoJ refer to an overall reduction in the number of litigated PI claims of 20% to a level around 30,500, which they attribute to "a change in the Civil Procedure Rules on holiday package gastric illness claims, and whiplash reform". There is in fact no published data from the MoJ breaking down PI claims into the specific types of claim, so it is unclear whether the reference to gastric illness claims is statistically based.

The actual data for Q3 shows 30,513 issued PI claims as a provisional total at a level which is a reduction of 3.7% from the preceding quarter (Q2) when there were 31,679 issued claims of that type. This is the 4th consecutive monthly decrease; though it should be noted that there were 6 consecutive quarterly falls between Q1 of 2013 and Q2 of 2014.

The MoJ comparison referred to in their reference to a fall of 20% is in fact between on the one hand the data from latest quarter and on the other that from Q3 of 2017 when there were 38,071 such claims, and if that comparison is made then the reduction is indeed 19.9%. It can be seen from the graph above that while looking back 12 months is a reasonable comparison exercise, in using Q3 of 2017 as the comparator, the MoJ has taken the highest single quarter since early 2013.

Although it seems clear that the level of litigated PI claims is reducing, in fact the MoJ headline percentage reduction of 20% may in fact over-emphasise the point, even with Q3 of 2018 being the lowest number for any quarter since 2011, that's a period of nearly 7 years.

If the figure for Q3 of 2017 is compared with other Q3s in the 4 years prior to 2017, then the reduction is smaller and is within a range between 9%-14%. In our view, this is more likely to be an accurate assessment of the extent of latest falls in overall injury litigation volumes, but we can check the point by now looking at the data on the basis of an annual analysis.

Looking at the data annually over recent years the number of litigated injury claims is as follows:

While the potential for this happening again cannot be excluded, in our view it is less likely to occur this time as 2019 will be a year when the claimant industry will be preparing for the incoming reforms in April 2020 brought about by the Civil Liability Act 2018 and associated Small Claims Track reforms.

It does appear whether the data is looked at quarterly or annually that the decision to litigate a claim is being taken slightly less frequently in the current claims climate taking account of the effect of the incoming reforms, even though the number of portal notifications of new claims across the RTA, PL and EL portals is currently stable as we saw last month when analysing the Claims Portal data for November.

Number of litigated injury claims by reference to claims values 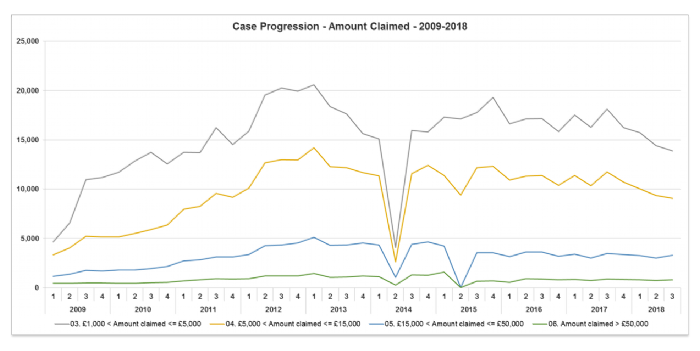 Alongside the global figure for new PI claims shown in the first graph, we also have available the same data broken down into injury bands, including £1-5k, £5-15k, £15-50k and above £50k as shown in the graph above.

It is of course the £1-5k category which will be primarily affected by the CLA reforms. While the numbers on the graph above may not tally precisely with those shown on the first graph, it is worth also considering the graph above to see current trend lines across the different value bands.

Another down turn occurred in Q2 of 2015 at the time of the introduction of enhanced court fees which applied to claims valued at over £10k which caused a reduction over the following quarter of no less than 99.1% for claims worth both £15-50k and over £50k, before volumes recovered over following quarters.

So it can be seen that the changes this quarter include a reduction of 769 at the 2 lower value bands where the greatest number of claims are made, while there are increases in volumes which total 348 at the higher end. This produces a net reduction of 421 or 1.5% which can be contrasted with the reduction of 3.7% when the data is assessed by reference to the global number of issued injury claims as carried out in the first part of this analysis.

While the points can be evidenced from this data that claimant operations are now less likely to issue claims worth under £15k, but they are correspondingly more likely to do so with claims worth over £15k, this may lead to an additional point that the stated quantum of claims at the time of issue is being increased.

In other words it is likely to be the case that certain claims which would have been issued with a limitation of value of no more than £15k are now being issued with a stated value of more than that figure. There is though no evidence of the extent to which this is taking place.

If we then compare the latest quarter with Q3 of 2017 as the MoJ are doing, then the extent of the reductions are across the range of claims values and in fact are:

On this longer term comparison, the overall reduction across these 4 value bands is 7,108 or 20.8% (which can be contrasted with the similar figure of 19.9% when the data is assessed by reference to the global number of issued injury claims as carried out in the first part of this analysis) almost all of which is attributable to the lower number of litigated cases worth up to £15k.

While the number of injury claims worth up to £25k being made remains steady in the case of RTA, PL and EL as confirmed by portal data, there is evidence from the MoJ stats of reducing numbers of litigated claims. While this has been seen before particularly in 2013/14, this time the incoming reforms that will dramatically impact RTA claims worth up to £5k, the largest category of claims by volume, suggests that the number of litigated claims in that value band will continue to fall in 2019.

The impact is wider in fact, as the evidence points to reducing volumes in claims stated to be worth up to £15k though this in part is likely to be due to quantum being pitched at higher levels. This point should be appreciated when it comes to anticipating behaviours that may be seen post implementation of the CLA/SCT reforms where claimants will be keener to see increased quantum levels to try to evade the impacts of those reforms.

On the other hand, the latest data also suggests that there is an increasing trend of more litigated claims worth over £15k, and the reforms create the position where additional claims activity based on attempts to achieve viable new claims models linked to higher value claims post reforms, together with greater optimism as to quantum, whether or not realistic, may well see litigated claims increasing in number at the higher quantum levels.