An increase in portal activity was anticipated this month following the unexpected contraction during August, giving us the most active month on the portal since March 2020.

Back to the Future (and now back to the lockdown?)

Local lockdowns have expanded and we now have a three Tiers system (should that be tears?) in place in England with most of the North West in the highest level of alert (different guidance applies to Wales, Scotland and Northern Ireland). With general guidance switching back to 'work from home if you can' we are likely to see reductions in transport usage again and the likes of gyms and bars closing, and restrictions on travel will probably affect casualty claim numbers both EL and PL.

Elsewhere, despite the twin concerns of COVID and Brexit, there has been a flurry of activity with the whiplash reforms this autumn, and the clear message from the MOJ is that the reforms will most definitely be coming in April 2021, or at least they are until that should change depending on external factors…

So we wait for the Rules and in the meantime court backlogs remain, with the time from issue to hearing continuing to increase at all levels.

The latest Department for Transport statistics show private vehicle usage to have dropped slightly, as might be expected, to around 85% of pre-Covid levels into October, having been at over 90% a month or so earlier: 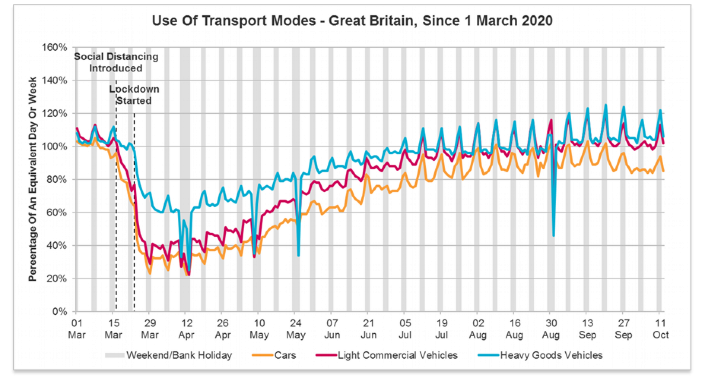 Despite the general 'work from home' message, the sort of drop in private car usage experienced in the first part of lockdown is unlikely, unless schools and businesses fully shut their doors again. In addition, there is still a fear of using public transport which will maintain private car usage somewhat. However, a further dip would seem inevitable stretching into November.

Cycling continues to taper off, but speaking from personal experience the shorter (and colder) days may well be accounting for this and this might be the last appearance for the cycling graph: 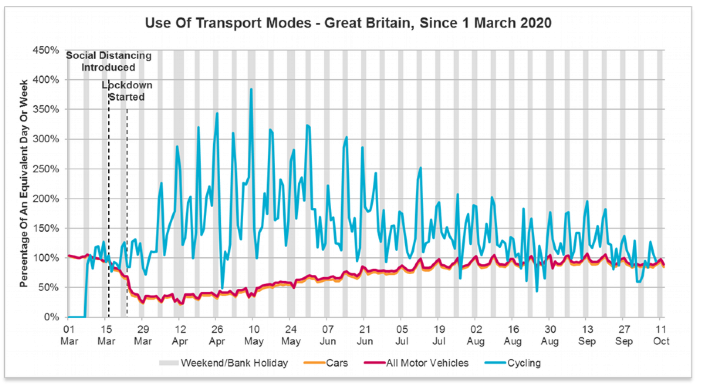 An extract from that shows that the proportion of adults travelling to work had risen to September but has now fallen again: 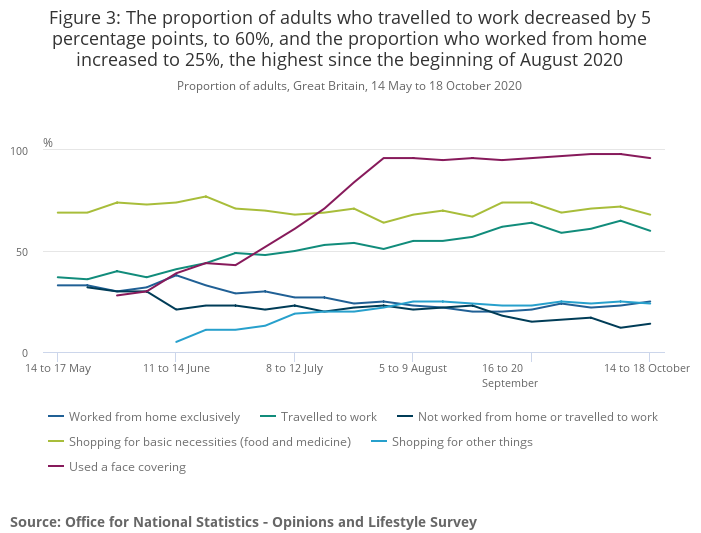 The reduced number of people physically in the workplace will undoubtedly be a factor behind the reduction of EL claims.

In terms of PL claims, footfall is a useful indicator of the long term effect on claims, and again relying on the ONS data we can see that in the week ending 18 October 2020, overall footfall decreased to below 70% of its level in the same period of the previous year, with footfall dropping across high streets, shopping centres, retail parks and across all 10 featured countries and regions, with the largest decreases in the East of England and Northern Ireland.

There has been a gradual decline since a peak at the beginning of September with the impact of local lockdowns biting, and one can only think this is likely to worsen over the next few months: 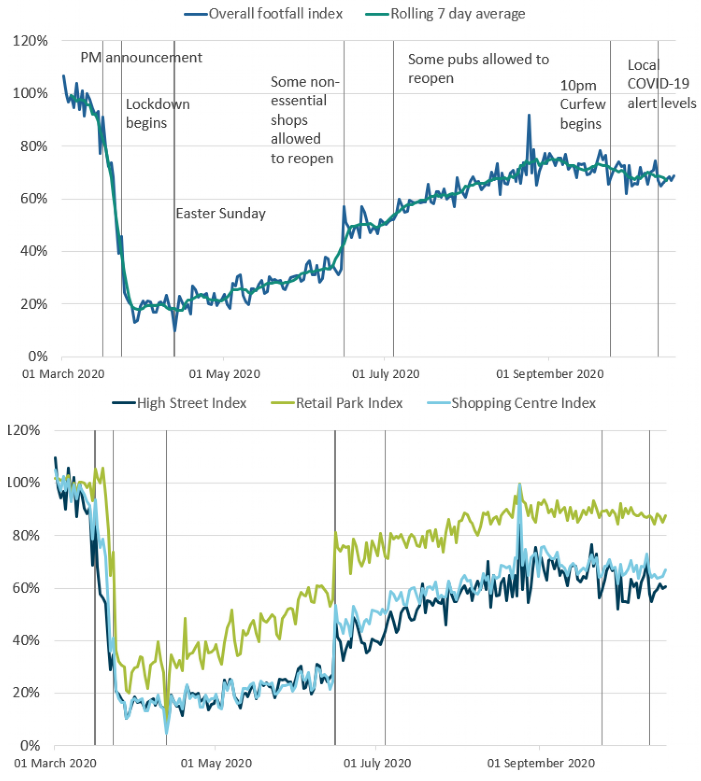 Last month we reported a flat civil workload but September has seen a rise in activity levels with items extending over 25,000 for the first time since March:

The number of hearings taking place remains well below the pre COVID baseline still, but has shown an upswing in September, with the highest level of hearings since May 2020 at just under 10,000:

It seems a long while since the reforms were delayed by a further year to April 2021, but time marches on and April no longer seems again very far in the future. The MOJ have re-stated that the plan remains to launch in April 2021 and that the departure of Lord Keen will not affect that plan.

The full CPRC had its first glimpse of the draft Protocol and Rules at their October meeting earlier this month. There are still some policy decisions outstanding with the MOJ, a considerable amount of paperwork for the CPRC to review, and the Portal build to be finalised. But at least on the part of the MOJ the intent remains to sign off on the Rules by the beginning of January. That would preserve the commitment to provide the industry with a minimum of 3 months from sight of the final Rules to implementation – but only just. One would not be surprised if whilst aiming for April there is some slippage to May or the beginning of June.

That of course pre-supposes the MOJ can find space in the Parliamentary timetable to pass the secondary legislation required for the rise in the small claims track, ban on pre-medical offers and the tariff after consultation with the Lord Chancellor.

Whatever the consultation entails, there is no prospect of any agreement regarding the valuation of minor injuries falling outside the tariff and the best, or indeed only, way of resolving that particular gap in the reforms still seems to be a trip to the Court of Appeal to give all concerned the certainty required. It doesn’t take a lot of crystal ball gazing to see a significant volume of low value litigation impacting an already overstretched court service…

Whilst Brexit has largely been usurped by COVID in the last 9 months, it is looming large and the usual political posturing on all sides makes it difficult to determine how close we are to achieving a deal. Boris Johnson's deadline of 15 October for a deal came and went, and talks now continue.

In any event, there is predicted to be short-term chaos with cross-border claims, and practitioners are expecting a rush of litigation whilst the 4th Motor Insurance Directive is still effective. Costs for insurers, both EU and UK based may rise to take into account additional legal work involved in resolving jurisdiction and applicable law issues. This will potentially require the input of foreign lawyers and proceedings in other jurisdictions where the translation of proceedings will be required, and the rules of unfamiliar legal systems will prevail, unless reciprocal agreements between the UK and EU27 can be put in place. Even the best case - re-joining the Lugano Convention 2007 - will require agreement of all signatories which could potentially take several months. Fishing rights seem to be occupying the negotiating table more than cross-border insurance claims at the moment.

There were two cases reported relating to low value claims this month that could have a significant effect on claims.

Firstly, in a decision to send a shiver down the spines of some claimant firms, in Belsner v Cam Legal Services Mr Justice Lavender held that the claimant had not given her "informed consent" to a deduction of 25% of her damages in costs. The case was brought by checkmylegalfees.com who believe it will open the door to recovery of excessive success fees for millions of people. The defendant firm has said that the position will be challenged in the Court of Appeal.

Secondly, in the case of Mason v Laing (Bradford County Court, 20 January 2020) (reported this month) HHJ Gosnell refused the claimant's appeal against a decision refusing the claimant permission to rely on medical reports at a stage 3 hearing that hadn’t been obtained in accordance with the Protocol. In a familiar tale, the claimant's solicitors obtained an initial report and then two further reports which they disclosed all together with the stage 2 settlement pack. They failed to comply with Paragraph 7.8B(2) – "a further medical report, whether from the first expert instructed or from an expert in another discipline, will only be justified where… it is recommended in the first expert's report; and that report has first been disclosed to the defendant". HHJ Gosnell agreed that the intention of the wording that a further medical report would "only be justified" meant that it could not be relied upon if the rule was not complied with, and not simply that there should be a cost sanction.

The reduction in the number of CNFs that we saw in August wasn't expected to continue and it hasn't. September figures saw 43,018 CNFs submitted to the portal, a rise of 14.1% on the previous month. Against the benchmark of September 2019 however this still represented a 24.2% drop. So, a recovery of sorts and the highest CNF count since March 2020. 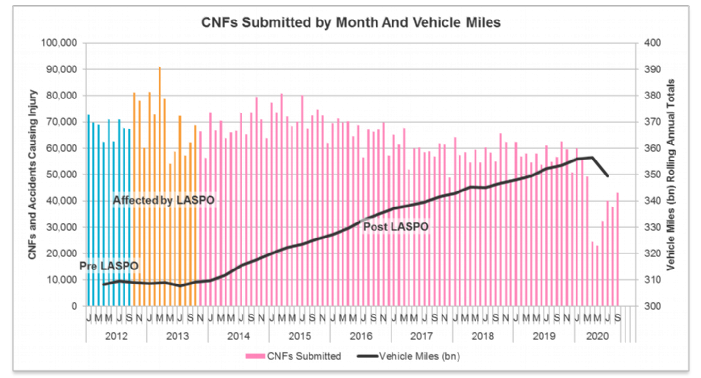 The rolling 12-month figures continue their slide although at a slightly lower rate, now trending quite significantly below 550,000 claims per annum: 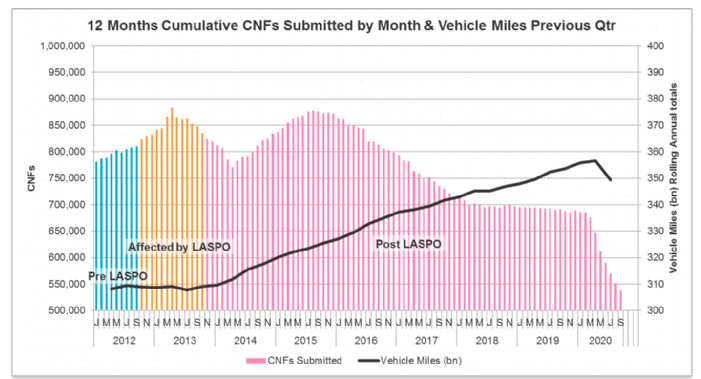 Earlier during lockdown we analysed the effect of lockdown on where the claims are coming from, and that showed a significant increase in the proportion of claims from non ABS/LEI firms. We have repeated the exercise here. It seemed too early in June to enable that to be considered a trend, however given the position remains in September albeit with a slight fightback in recent months, it seems safe to label it that way.

The category "other" is made up of companies who source work through accident management companies and/or claims management companies. This means that as a proportion of their incoming claims, insurers are seeing a higher percentage of farmed claims and non GTA hire and repair claims. An analysis of the PL accident data for September 2020 saw 3,548 CNFs submitted onto the MOJ portal. In comparison to August 2020, this is an increase of 631 submissions or 21.6%. This was still a dramatic reduction when compared to September 2020 of 21.4% year-on-year. Again, like RTA this was the most new claims presented since March 2020 and these are likely to be 'genuine' new claims rather than the cabinet trawls suspected in the early lockdown months. 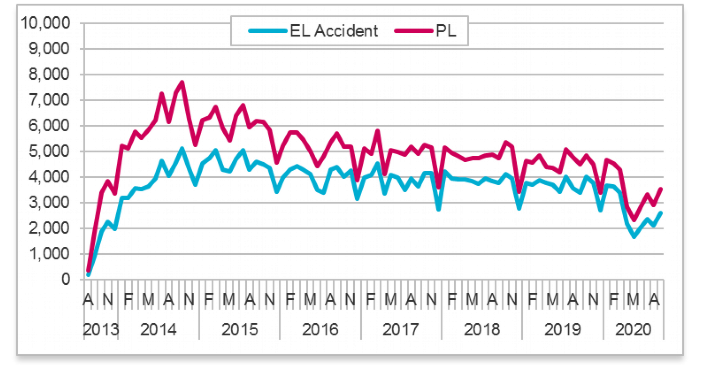 EL accident data showed 2,625 CNFs submitted following the path of other areas with a 22.4% rise on August but a 23.2% fall on the prior year. The number of RTA claims proceeding to a Court Proceedings Pack remains lower than pre-lockdown, and with the reduced number of CNFs since March it is hard to foresee any significant rise soon. The numbers were still higher than August however, with 4,383 packs submitted, a rise of 6.7%. This may just reflect the annual leave in August.

For EL and PL the number of court packs remains low – just 63 for EL Accident, and 51 for PL.

The percentage of claims proceeding to CPP remains high however as this chart shows:

PSLA settlement values in RTA fell in August but came back significantly in September, rising 2.1% or £61 per settlement to a new high of £2,916. Our analysis shows that the average prognosis from the "other" route to market is 2 months longer than from the LEI/ABS Route to Market. We may find that the increase in the proportion of claims from the "other" Route to Market has an inflationary pressure on PSLA.

Retention rates continued their general upward trend since the lows of March and April. This might be expected given the increased capacity and resource available as a result of the reduction in claims volumes.

Now attention moves towards October's figures with Covid infection and death rates seeing increasing parts of the country moving to Tier 3 and the spectre of another national lockdown looming quite large. A no-deal Brexit appears in the balance which will impact on trade tariffs, car parts and cross border litigation. And yet whiplash reform still manages to hang in there! At least we have plenty to talk about…