With the advancement of electric vehicle fleets and the development of electric roads, is this the end for fossil fuels? Read the fourth in our series of articles that explores how technology is being harnessed to drive the transport of the future.

Fossil-fuelled vehicles are entering their twilight years. Legislation in the UK and in France will prohibit the sale of new petrol and diesel vehicles by 2040, while Norway aims to achieve this by 2025. According to Frost and Sullivan’s Global Electric Vehicle Market Outlook 2018, logistics companies such as DHL, DPD and TNT “are switching to a 100 per cent electric fleet by replacing conventional vehicles with electric vehicles that are equally competent and a and a perfect fit for the business model”.

Electric vans could rapidly gain traction in urban environments, according to Dr Wolfgang Schrempp, MD at automotive consultants CC Consulting, due to the exponential rise of online retail and the growing propensity for home delivery of groceries: “Electric vans will be a forerunner in the future for this battery activity. People are no longer shopping in the cities, they’re ordering nearly everything online today”, says Schrempp, citing the stressful realities that “there’s no parking space or if you do have parking it’s very expensive” – not to mention the political and environmental imperatives of reducing emissions."

* You will also receive the first three articles in this series: 'AI at play'  'Big Data, Big Opportunities' and  'The Blockchain game changer' along with the full report as soon as it is published later this month.

Delivering the goods: Harnessing technology to drive the transport of the future

We conducted extensive research to assess how Artificial Intelligence, Big Data Analytics, Blockchain and Electrification are transforming the transport sector. We examined the views of 250 CEOs, CTOs and CLOs from Europe, the Middle East and North Africa, Asia Pacific and North America, incorporating perspectives from industry leaders and innovators, as well as legal perspectives from our own experts in Italy, Germany, UK and UAE.

The full report 'Delivering the goods' will launch at the end of September, but you can exclusively receive technology feature articles throughout September. These include: 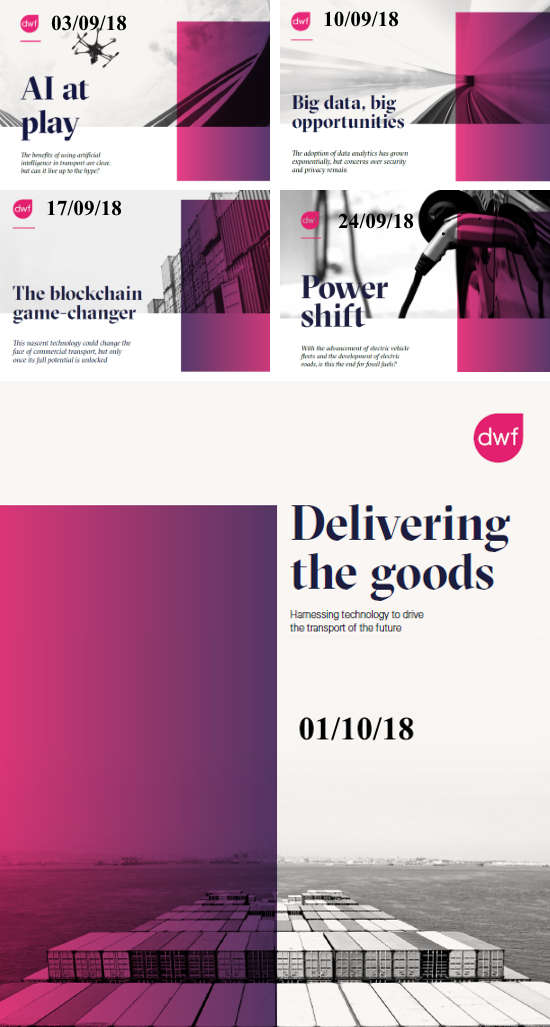