The June portal data is now available and allows an up to date of latest trends which continue to appear to be affected by the incoming Civil Liability Bill and accompanying Small Claims Track changes where the Bill has entered the House of Commons with its Second Reading due to take place on 4 September.

We return to a picture of generally reducing new claims volumes in June, with RTA down 7.4% and EL down 1.7%, though with PL showing a slight increase at 0.4%.

Longer term trends assessed over the preceding 12 months are all negative this month, RTA is reduced by 0.7%, while both PL and EL are down by 0.3%.

It is rather early to predict a total for the accounting year of 2018/19 only 3 months in, but if the current RTA numbers continue, we will end up around 2.7% below 2017/18. While a reduction, it is much smaller than the 12.0% decrease seen between the two previous years.

We saw a substantially increased PSLA figure last month for RTA claims which was therefore at record levels. Predictably RTA PSLA levels return to a more normal level in June, but still at the 3rdhighest month to date, and around 1.7% above the level when the 14th edition of the Judicial College Guidelines started to impact. 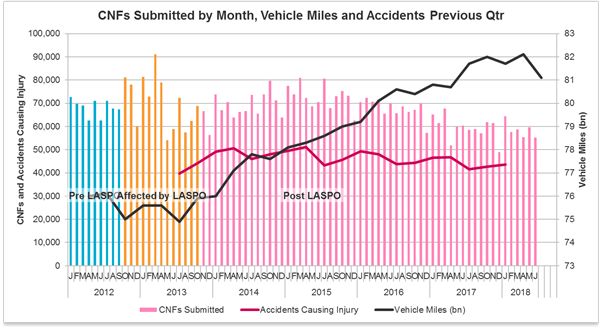 In June there were 55,185 new claims into the RTA portal, a fall of 7.4% from the 59,611 seen in May. The current level is within 300 of the incoming number which was reported for April, so June has returned to that type of level.

After May's exception we return this month to the previous pattern of seeing lowest volumes for that particular month of the year since the portal was new. Compared to recent years this June's figure is 8.4% less than June 2017, 21.1% lower than June 2016 and 21.6% below the June 2015 number.

Adding June to the average monthly number of new RTA claims for the current calendar year reduces the figure to 58,484. This is 1.7% less than the monthly average for 2017 which concluded at 59,521.

At 21, there was the same number of working days in June as there had been in May. So the fall demonstrated on the graph above is of precisely the same extent as on the first graph. This equates to 2,628 new claims per working day.

This is now the 16th consecutive month where the number of new RTA claims per working day has been under 3,000.

A change however is that while the first 5 months of 2018 had shown levels higher than in the second half of 2017, this month's number has ended that trend and instead is comparable to the latter half of last year. 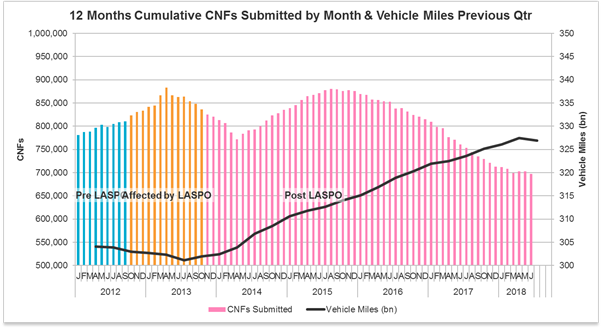 Looking at the data on a rolling 12 month cumulative basis in order to see longer term trends, there was a decrease in June of 0.7% from 702,643 to 697,554. This was the 30th monthly fall in the last 34 months. The pattern of increases over the previous 2 months which were potentially signs of stabilising numbers of new claims has come to an end.

The same graph also shows in a red line the number of road accidents causing personal injury which continues to be relatively stable. As with the number of vehicles travelled, the number of injury-related accidents does not seem to directly impact on the number of new claims, which instead are more likely to be linked to ongoing reform in this sector.

With the inclusion of June's data we now have figures for 3 months of the accounting year up to 31 March 2019. Based on those 3 months, an annual total of 681,012 would be reached. 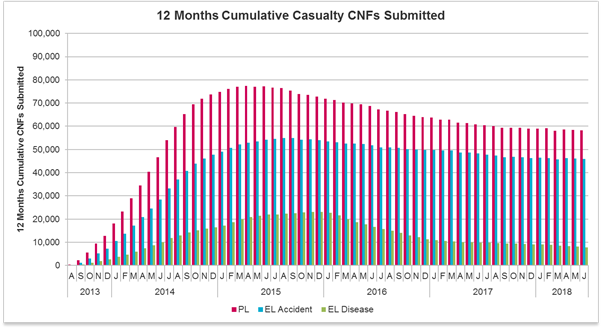 Over the preceding 12 months up to and including June the total number of PL claims was 58,204, which represents a drop of 0.3% from the corresponding 58,399 seen at the end of the previous month.

Again, this is the second consecutive month to show a decrease, but as with PL the picture over the last 9 months has been more mixed than previously, with 3 monthly increases alongside 6 decreases. Also as with PL, the recent longer term trend has been negative, over 23 of the last 31 months in fact.

This is the 30th consecutive month to show a fall, and the rate of decline continues to be much greater than with PL and EL.

Over 2018 to date the average monthly fall is 2.5%, compared to 1.4% last year so the rate of decline has speeded up more recently.

The month of June showed improved retention rates for PL and for EL disease, but reductions for RTA and for EL.

Longer term trends measured over the preceding 12 months show RTA, PL and EL unchanged from last month: RTA at 53%, EL at 28% and PL at 21%.

There continues to be no discernible increase in the use of stage 3 over a period which now approaches 2 years, unlike the increasing use of stage 3 up to that point. The factors which promote use of stage 3 such as the additional costs payable continue in operation but do not increase further in significance from their current level.

Last month we saw a substantial increase in PSLA levels, as the published figure increased no less than 9.1% to £3,069. We suggested in reporting that increase at the time that the figure of £3,069 was likely to be exaggerated and that future months would show a reduction, and indeed that is what we now see.

This month the average PSLA figure is £2,830, which represents a drop of £240 or 7.8% over the month. It is though the 3rd highest figure to date and probably represents a fairer assessment of the slowly (rather than suddenly) increasing trend.

The 14th edition of the Judicial College Guidelines is likely to have impacted from last November onwards, and the current level is 1.7% above that. The extent of the JCG rise was 4.8% so its full impact is still to be felt and a gradual upwards trend is likely to continue from where the data stands at present.

The casualty portals taken together had their highest use of stage 3 to date last month as the bar on the far right of the graph above shows. In reality this was due to its use in the case of EL claims.

With EL, there were 104 packs, the highest number to date and an increase of 62.5% over the month.

There were 3 EL disease cases where a court pack was prepared.

Despite the position mentioned below with EL, it remains difficult to identify a specific impact from the 14th edition of the JSG in the case of the casualty portals with their smaller sample size.

As to RTA, the trend seen above of stabilising use of stage 3 transfers into the graph above. Around 3 in 10 RTA cases which conclude within the portal process do so at stage 3 and that has been the position now for over a year.

In the case of PL and EL, there is more variation on smaller sample size, but of each type of claim currently around 13% of those claims which conclude within the portal do so at stage 3.

Claims still in the portal 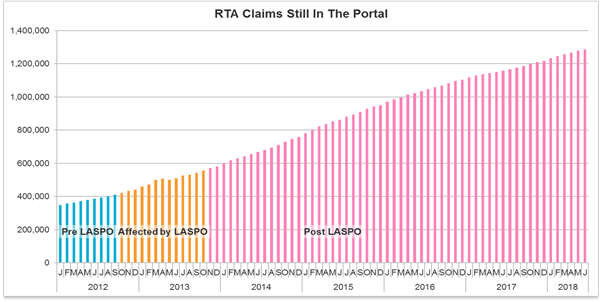 As part of the Civil Liability Bill and Small Claims Track changes, a new process is to be designed for claims handling including by litigants in person. The MoJ have recently confirmed there will be more time, up to April 2020, for the set up and testing of those processes to happen, which will inevitably involve changes to the current portal.

It is worth noting that as the current processes work, the data points now to around 1.3m claims having entered the portal but not apparently having left it. The number has increased incrementally to that level and steps which have been implemented by Claims Portal to date seeking to clean up that part of the data has not appeared to impact on the continued rise.

Some greater control over claims within the portal and the time that claimant representatives take to advance them would seem to be called for, and this may be more important still when litigants in person are running their own claims. An opportunity may present itself during the current development processes.