Claims Portal have released their data for the month of October which shows that despite the Civil Liability Bill obtaining its Third Reading and moving towards Royal Assent via Ping Pong on 20 November, new claims volumes remain resilient.

New claims volumes entering the portals in October were up across the piece. The monthly increases were 20.3% in RTA, 14.3% in PL, 9.7% in the case of EL and 21.1% with EL disease. Despite the effect of a longer working month worth an extra 15.0% time for claimant operations, there were other pointers to suggest the increases were significant.

In the case of both RTA and PL, this was the highest level of new claims in a month for 20 months; in the case of EL it was the highest level for 9 months. Whereas we have often encountered the position this year where for various portals the new intake has been the lowest for that particular month for many years, this time round the RTA level was higher than in October 2017, while the PL and EL levels were higher than in October of both 2016 and 2017.

Looking at the longer-term assessments made over 12 months, RTA, PL and EL all showed increases, as well as showing signs of levels continuing to stabilise and no longer decreasing.

RTA rose 0.6% on this measurement over the month, and has effectively been stable since March 2018: in fact the current level is marginally higher than in March. PL rose 0.3% and while continuing to show a marginal reduction the level is close to stability. EL rose very slightly by 0.01% and is on the other side of stability, continuing to show marginal increases.

Looking at the politically important year to the end of March, we did of course see a reduction of 12.0% in portal RTA volumes as between 2016/17 and 2017/18. Whereas we have so far in 2018/19 been projecting a small reduction for the current year when compared to 2017/18, the level of intake in October now means that for the first time we are projecting a small increase in 2018/19. One of the factors behind the 20.3% increase in volumes over the month is undoubtedly the additional working time available in October when compared to September. At 23 days, October was higher than September's 20 days by 15.0%.

But we should recognise that this is not the only factor behind the high volumes in October. This can be seen from the fact that the data indicates that there were 2,883 new RTA claims per working day in October. This is the highest level since January and close to the 3,000 barrier which was last exceeded in February 2017, even though is now the 20th consecutive month below that level. 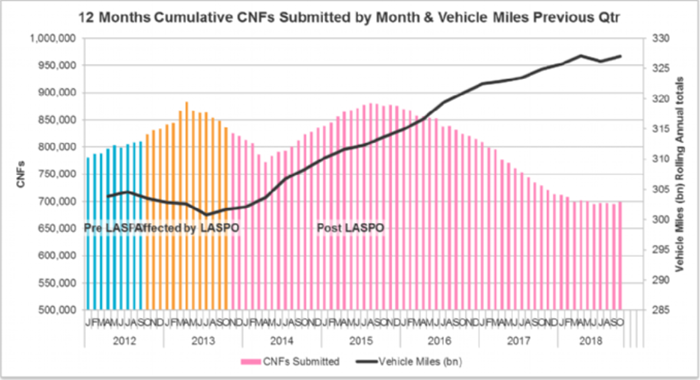 Looking at the longer term 12 month cumulative measurement, we saw this month the total to October rise by 0.6% from 695,040 to 699,546. An increase in this data is no longer uncommon.

Since March, the position continues to appear stable as the bars on the graph above representing recent months shows. The current level is in fact 0.1% higher than where the data stood in March at 698,801. Over the 7 months since then, there have been 3 monthly increases set alongside 4 decreases.

This new trend seems to have replaced the earlier trend of regular monthly falls, though if we do look back at that we can now see over the last 33 months a pattern of 6 monthly increases (3 of them being recent) set alongside the 27 decreases.

Against that background it is unsurprising that looked at longer term the rate of decline has slowed: from 11.5% between October 2016 and October 2017, to 4.1% over the last 12 months. 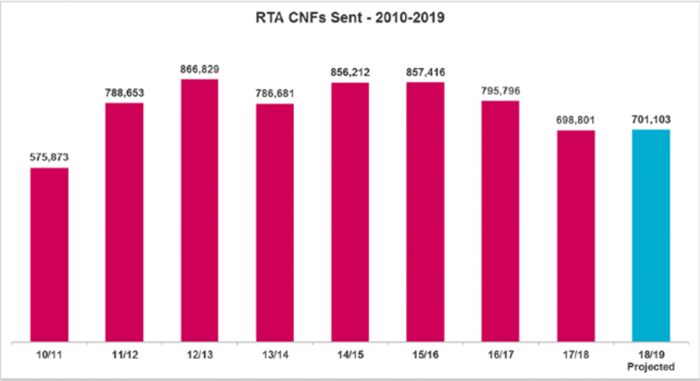 Including October's higher figure we are now 7 months into the year used by the DWP in their annual measurement of CRU new claims data which runs to the end of March each year. 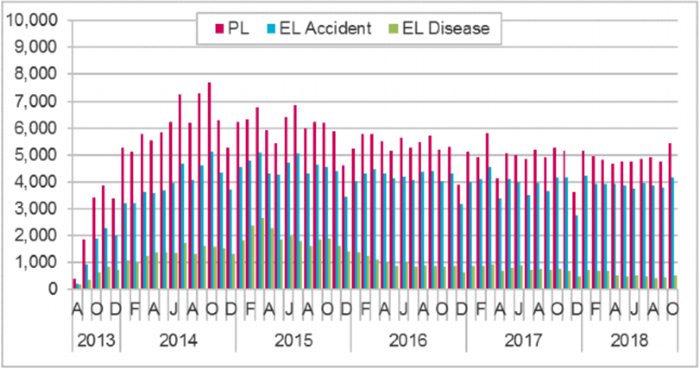 October saw 5,428 new PL claims, an increase of 14.3% over the level seen in September. While an effect will have arisen as a result of the 15.0% increase in working days over the month, we should also note that as with RTA claims, this is the highest monthly level for 20 months since the same date:  March 2017.

There were 4,167 new EL claims in October, which is a level 9.7% above that seen in September. This is of course less than the amount of extra working time over the month, but still the highest monthly level since January 2018.

The average monthly total for the calendar year to date is now 3,943, which is 2.3% above the corresponding figure for the whole of 2017. This has risen from 1.7% at the end of September.

Comparing the first 10 months of the year, the current level is 0.2% above last year, a similar level to where it stood at the end of September.

October saw 523 new EL disease claims, an increase of 21.1% over the month, to the highest level since April. 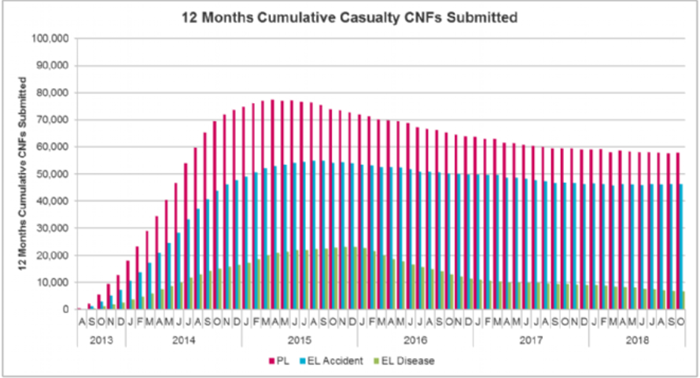 Over the last 40 months there have now been 7 increases (including last month), of which 6 have come in the last 13 months.

The average monthly decrease over the calendar year to date remains at 0.2%, a reduction from the 2017 average of 0.7%.

Over the last 35 months there have now been 11 increases to set alongside 24 reductions, while over the last 13 months we have seen 6 monthly increases and 7 reductions.

The average monthly increase over the calendar year 2018 to date remains at 0.2%, a changed position from the average reduction of 0.6% in 2017.

The average monthly decline for the calendar year 2018 to date remains at 2.7% compared to 1.4% during 2017, so we can continue to say that the rate of decrease has effectively doubled.

In October the retention rate of claims in the portal rose in the case of EL, but fell back in the other 3 portals as the graph above demonstrates.


Cases moving to stage 3 involving the issuing of legal process are included within the definition of claims retained in the portal process on both graphs.

In October there were 6,383 court packs prepared as a preliminary step to use of stage 3, which represents an increase of 10.7% from the prior month's level, though this level of rise is of course less than the additional working time available when the month is compared to September. The average monthly level during the calendar year of 2018 to date is now 6,145.

At this level we are returning to the higher levels seen in the second half of 2017, and this is the highest level since July 2018. But there is no clear sign of a return to an increasing trend as yet, and more data will be needed before that may be visible again.

The current level is now 2.5% above last November, which can be taken as about the time when the effects of the 14th edition of Judicial College Guidelines with their average 4.8% recommended increases began to have effect.

As to EL disease, as in September, there were no court packs in October. The monthly average for 2018 is 2.

With PL, this level fell marginally by 0.1% to £4,335, but still the fifth highest month to date. The current level is 1.0% above where it stood when the 14th edition of the JCG started to impact.

The graph above shows the percentage of portal cases settling and identifies whether or not they need to move from stage 2 into stage 3 to do so.

The RTA stage 3 proportionate use fell by 1% to 30% in October. The trend over the last 12 months or so seems to have been a stabilisation of use of stage 3 at around that level.

In the casualty portals, PL usage fell 1% to 11%, while EL rose 2% to the same level as PL. While the monthly variations are greater in the case of casualty, there also seems relative stability in proportionate stage 3 usage over the last 12 months at around current levels.

Breakdown of how portal claims conclude

These graphs show the current and recent past positions: 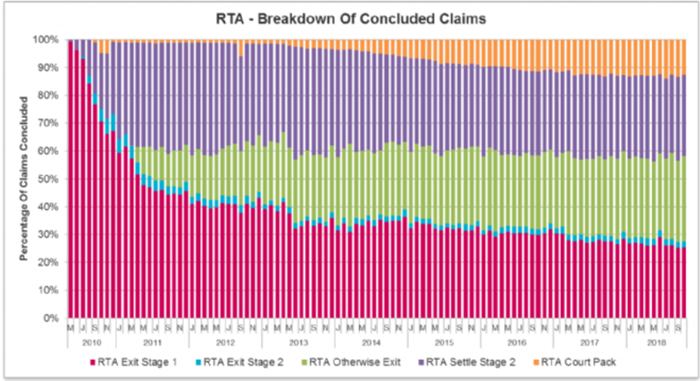 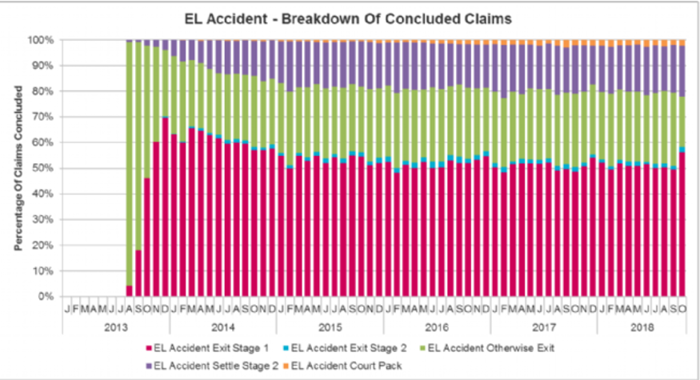 It is unsurprisingly the graph for the oldest and original portal, that for RTA claims, which shows the most successful process in terms of claims retained and settled within it.

Stage 1 exits dominate the casualty portals, most clearly in the case of PL where there will usually be less connection and less knowledge of the defendant on the part of the claimant.

Issues of that type seem not to have improved over recent years, so that while development of the RTA portal is planned as part of the whiplash and associated Small Claims Track reforms, these graphs could be said to illustrate the need for continued development of the casualty portals so that they can more clearly meet the different needs of these sorts of claims.

Press release DE
Brits back insurers: Over 9 in 10 are satisfied with their insurance providers 18 May 2022